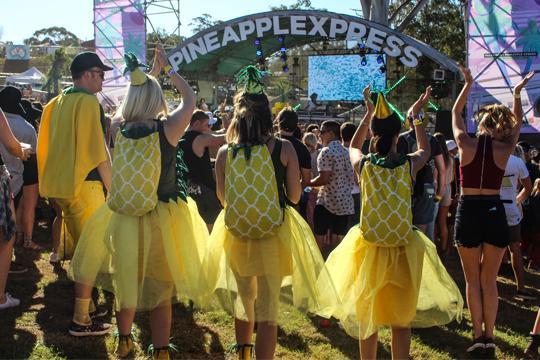 triple j Unearthed Super User Kritty Barker tackled her hometown festival, the Big Pineapple Music Festival, over the weekend. It is safe to say she had a very fun time. Here's her #exclusive report:

The past weekend saw the 2016 instalment of The Big Pineapple Music Festival take place on the Sunshine Coast. Located on a huge parklands opposite the fruity landmark, the Sunshine Coast lived up to it’s name and delivered perfect weather for a day of dancing and cold ones on the grass.

Known for its diversity, the Sunny Coast festival catered for everyone this year. From fans of indie to pop, electronic and rock, everyone had a chance to tick their boxes. A sold out crowd and an A+ lineup consisting of Unearthed winners Pop Cult, alongside Tkay Maidza, You Am I, The Smith Street Band, RÜFÜS and more, left me feeling pretty proud of my hometown festival :’ )

• The crowd's collective face melting when The Bennies joined You Am I on stage:

Discover the independent, Australian songs Kritty's loving RN over on her Unearthed Profile.