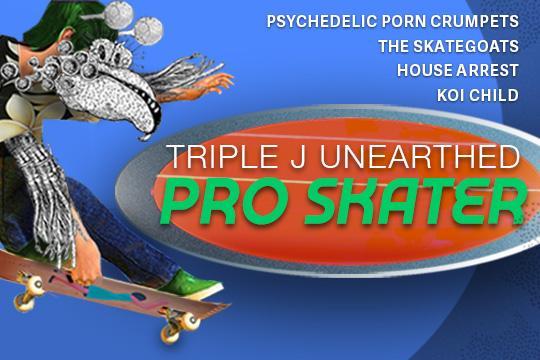 You're about to acid drop into a thick-lipped bowl of nostalgia with some fine new Australian music.

In addition to teaching us to take nonsense phrases like 'kickflip mctwist', 'pop shove-it', and, of course, 'mongo-foot', completely seriously, The Tony Hawk's Pro Skater series was also an incredible vehicle for musical discovery. The franchise arrived at the zenith of Punk Rock 101, when Dickies were ubiquitous, hair was spiked, and guitar chords were played exclusively in Drop D tuning by dudes who would one day go on to marry Avril Lavigne. The game's soundtrack contributed in no small way to the popularisation and proliferation of skate punk in the late '90s and early '00s, fast-tracked by the inclusion of acts like Goldfinger, Millencolin and Lagwagon.

In this special, Dave Ruby Howe and Lachie Macara recast some of those great musical moments from the THPS soundtracks – Dead Kennedys, cky, Public Enemy & Anthrax – with modern day equivalents from triplejunearthed.com.

Helping with this task will be triple j’s Gen Fricker, a mad gamer and huge Tony Hawk Pro Skater fan, and one of the sickest skaters in the country, Nikki-rose Quinlan, who joins us to bring some legitimacy to this operation.

"I've cracked my skull before, been a bit comatose, broke my pelvis in 3 places," she told us. "I had a roll around to these songs and they definitely made me feel like I was playing Tony Hawk again."

We're re-imagining the Tony Hawk's soundtrack with all-Unearthed tunes. Which songs should be on there? pic.twitter.com/1DLqlrEUcE

Columbus - Downsides of Being Honest

Jobstopper - Is It Hot In Here, Or Is It Just You

Soul Benefits - Back In The Day

The Skategoats - There's Something About Mary Jane

The Nuclear Family - I Wanna Be A Dog In The Sun

House Arrest - Hell Is A Halfpipe