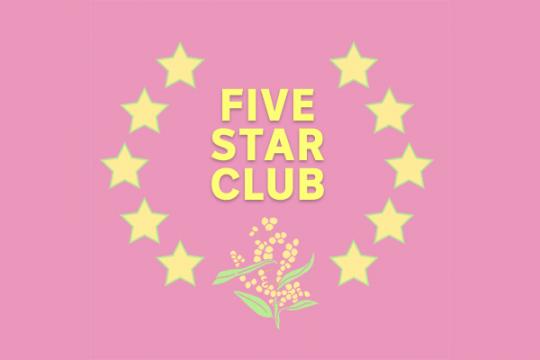 There’s a red velvet rope, a queue around the block, and the soundtrack is second to none.

Come meet the VIP members! This is The Five Star Club, a playlist of all of the songs that have received Five Star reviews from triple j staff through the first quarter of 2019.

Who’s copped the most Five Star reviews so far? We’ve got a few tracks to comb through who got the full fist from multiple triple j team members. Among them, Adrian Eagle’s ‘AOK’, which received a five-finger blessed punch from two of our triple j family members. You’ll also find a pair of Five Star reviews for each of Egoism, Gazey, Good Doogs, Tones & I and Windwaker.

The artist with the most 100 Emojis, tho? That would be Triple One. The Sydney rap boyband charged in large on their new song ‘Butter’, and triple j staff churned out five Five Star reviews in response. It’s a belter from the first beat.

Hear every song from the Five Star Club right here and see what the triple j team had to say about the tracks below!