Unearthed Forecast: Ones to Watch in 2016 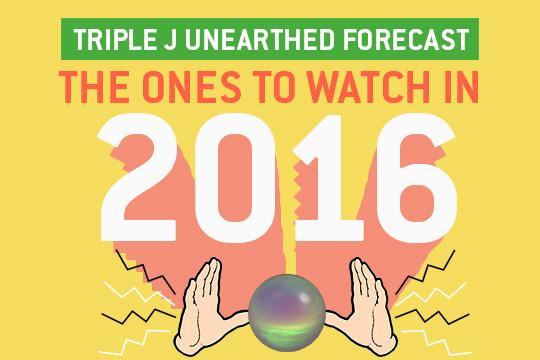 Here at triple j Unearthed, we spend hours each week staring longingly into our crystal balls and dreaming about ~the future of Australian music~

After all, 2015 was a total stunner: we met hundreds of amazing new artists who, in their own small way, changed the Australian musical landscape for the better last year. With such a killer year in the books, it's fair to ask the question: is there any way 2016 can live up to its predecessor? And, if so, who are the artists to keep an eye on as the year gains momentum?

After much temple rubbing, tarot reading, and being scared by horoscopes, we've gotta tell ya: 2016 is looking mighty bright. We've already found a metric tonne of tremendous new songs through the first few weeks of the year, and we're excited now to present to you our Unearthed Forecast of artists we think are gonna do good things in 2016. In this list, you'll find some names you might know, some you might not, and some that are have only been up on triplejunearthed.com for a couple of days. All of them have left lasting impressions on us, and we're sure they're gonna hit you right in the feels as well.

Put away your weathervane: here's the Unearthed forecast of artists to watch in 2016.

Listen to Dave Ruby Howe and Steph Hughes break it all down:

Here’s the thing about Alex Lahey. You’re gonna hit play on ‘Air Mail’, say to yourself, Yeah this is cool, quite good. Then, as if possessed by some great Australian Music demon (you might decide to call him him Grave Ruby Howe or Dom AHhhlessio), you’re gonna listen to it again and again and again and again because it is the most wonderful, insidious kind of pop song. The way that chorus crashes in, her pristine voice carrying the kind of melody that warrants additional listens, then, that blistering guitar riff – coming in at the exact moment where music and magic intersect. You almost have to hit repeat. 2016’s gonna hold good things for Alex Lahey. - Max Quinn

The first thing you think when you hear Harbours: BIG. This music will tear the flesh from your bones while your skeleton still jumps to it. The Melbourne five-piece deliver a wall of sound that is at the same time melodic, accessible and irresistible. Take latest single ‘Take Me Under’ as an example: it’s a huge, cathartic bit of noise that hits with a rush and leaves you with that sweet, sweaty post-mosh afterglow. The band held their own alongside a heap of heavy-hitters as our Unearthed comp winners at the Unify Gathering in January, and we're heaps excited for what's to come. - Nat Tencic

This is alien music. Let's not pretend any different. It’s the soundtrack of Area 51, the truth behind those crop circles and why Scully & Mulder are making a comeback. “IljusWifmo” want us to think they’re just two young dudes from Sydney inspired by UK Garage, dishing out deep intergalactic grooves on the regular. But we’ve listened to enough new Australian music to know heat this hot isn’t made this far from the Sun. Keep your ears to the ground and do not take your eyes off IljusWifmo in 2016. - Lachie Macara

I really wish IV League had been around when I was 18. I was nursing a wound after my first breakup that could have used the salve of their hopeful garage melancholy. When Bella Venutti’s voice slices through the faded alt-rock jangle of ‘Lit Screen’, you feel instant, overwhelming longing. “Has it really been two years?” With lyrics lifted from high school journals, Bella and partner Lachie Gilmour drag you into a hazy teenage dream. Think late nights playing video games, bare feet on the dashboard, beers on the garage couch. It’s also first nostalgia pangs, breakups over Messenger and suppressing big feelings until you explode. IV League deliver wafty indie gems, but it’s Venutti’s voice that turns it into treasure. Her dreamy howl can rip your heart open and heal it again in just a couple of bars. - Nat Tencic

I remember the first time I heard Jess on triple j Unearthed so vividly. I'm a human puppy dog and I get excited about a lot of Australian music every single day, but this was the first time I completely lost the plot for an artist nobody had even heard yet. Her song ‘Get Down’ is a compelling, smart pop song that also happens to be catchy as all get out. It’s rare to find such a fun, fully-formed commodity. Things escalated quickly: the next week 'Get Down' was on full triple j rotation, then Jess became triple j Unearthed’s Feature Artist, and a month or so later I heard ‘Get Down’ in between Macklemore and Major Lazer on the playlist at my gym. One stellar Field Day performance, a Paces collab, and two Elliphant supports later, it’s safe to say things are only going to get bigger for Jess Kent this year. - Max Quinn

The halls of triple j Unearthed are frequently pattered with the steps of young Australian musicians blazing their own trail through our annual Unearthed High search for the best school aged artist in the country and in 2015 we were mighty taken with then-17 year old producer Curtis Kennedy, also known as Kuren. Hailing from Hillston in regional New South Wales, the now 18 year old artist is promptly delivering on that early promise with his debut EP ‘Love Lost’ featuring six classy productions that are rendered with a heartbroken mood that would do Ta-ku proud. Add to that Kuren’s burgeoning collaborative work – he’s recently remixed Banks and Sophie Lowe and has cooked up an unreleased tune with Allday. Looking at all that activity it’s easy to forget that Kuren’s still in his late teens and has to balance his production schedule with shifts at the local supermarket. Basically, this guy’s future is insanely bright and it’s going to be fun watching him blind everything in his path. - Dave Ruby Howe

Canberra-based hip hop artist LTC (Lolesio The Courageous) came to our attention in the first half of 2015, and consistently impressed us with a string of fantastic singles throughout the year. He’s been creating world-class hip hop and turning heads with a sound that is both ambitious and refreshing. He’s shown off his talents as an emcee, singer and producer on tracks like 'Midd;e of the Night' and 'Who Am I'. He’s taken his live show up and down the country, and he was one of our most played artists of 2015. We expect him to turn even more heads in 2016, and continue his rise as a unique voice in the rich tapestry of the Australian hip hop community. - Damon Hughes

We’ve known about Old Sault for a grand total of about two weeks, but she’s left enough of an impression for us to forecast big things this year. All we’ve got on the Gold Coast songwriter so far is that she’s called Angie Farr, that she writes the songs and plays guitar, and that her debut offering ‘Ghost’ is a sublime piece of gloomy indie rock. On the continuum, she probably sits somewhere between The Jezabels and Death Cab For Cutie in terms of both deep-seated angst and general moodiness, and you can hear it in the way ‘Ghost’ turns out a melancholic, beautiful three minutes and forty seconds. One to keep an eye on as the year unfolds. - Max Quinn

If you’ve been within earshot of a radio over summer then there’s every chance that you’ve been charmed by the sounds of ‘Our Place’ from Perth’s Verge Collection. Though on the surface it might appear otherwise, ‘Our Place’ is really a complex little tune; it’s a concise bit of guitar pop delivered with a laidback breeze by the WA four piece, with a rattling ode to twenty-something revelry and mateship that packs the kind of lyrical sting that tells you that this band might just be pretty special. We’re not the only ones who’ve got tickets on them either, after impressing at the 2015 WAM festival Verge Collection have been playing shows with The Ocean Party, Saskwatch and Bad//Dreems. Get around Verge Collection, we promise it’ll feel like making four new best friends who just happen to make fantastic tunes. - Dave Ruby Howe

"One of the funnest things we do in this band is try to find how we fit on stage", says front dude Ray Dalfsen backstage at a hometown show in Adelaide. 4 of 7 members of West Theb are squeezed onto a single couch in front of me. "Two of the guys in the band have guitars with really sharp heads and I reckon I've nearly been guillotined 5 or 6 times." Their live show is a wonderfully hot mess but don’t be fooled into thinking they’re just here to make up (a lot of) numbers. "Originally when we started it was no secret we were taking the piss. But now we're taking it really seriously. We've started writing songs that aren't about Australian fast bowlers and bullshit like that". 2016 might just be the year for WTBP - hold onto your legionnaires cap. - Lachie Macara