Unearthed Forecast: Ones to Watch in 2017 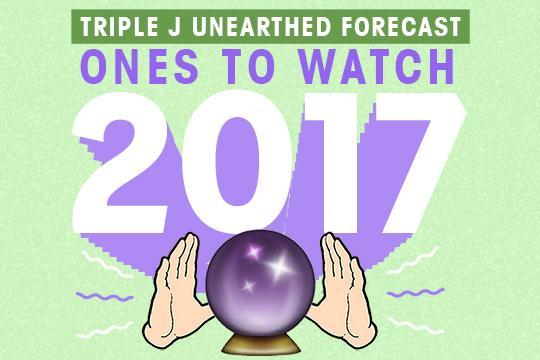 It's no secret that 2016 was a massive year for independent Australian artists on triple j Unearthed, and with a landmark Hottest 100 in the books, it's time to for us to break out the tea leaves and get crystal ballin' on the year ahead.

For the second year in a row, we're here to talk tarot, and we're sensing several musical blessings in your immediate future. This is our our forecast of the artists we reckon you need to watch in 2017.

Let's not beat round any more bushes. It's time for you to know about the artists we reckon are gonna lead the charge for independent, Australian artists in the weeks and months that lie ahead. Get down!

Her moniker would suggest she’s up in space but everything about Sydney’s Alex The Astronaut is down-to-Earth. A maths and physics student based in New York, she observes her world as an outsider, noticing the little things, reporting back on the insanity with simple sincerity. With her breakthrough ‘Already Home’, Alex proved herself to be a very clever muso. No line written anywhere more astutely sums up the current moment than “There’s billionaires for president / and parking fines at hospitals”. As Richard Kingsmill said in his 5-star review “What a line. The world is often cruelly unjust, but songs like this make it a better place.” With an international publishing deal under her belt already, you can expect a lot more truisms from Alex in 2017.

Mysterious Brisbane project Confidence Man quietly dropped their debut ‘Boyfriend (Repeat)’ like they were spiking our water supply with a rabid dance virus. One taste and you’re infected. Symptoms include sassy sing-talking, howling and boogie fever. There is no cure. The supergroup which features members of Jungle Giants and The Belligerents (but shhh that’s a secret) was meant to be a short term side-project, but the Boyfriend fever that won them our Laneway comp for Brisbane and heaps of festival spots, has pushed the quartet to put out a full record. Stay tuned for more Confidence Man in 2017, we’re sure they’ll be on repeat.

“Up the punts! Up the punts! Up the punts!” If you make it out of a Dumb Punts show unscathed that chant will be your lasting memory. In short time the Melbourne trio – led by brother sister combo Seattle and James – have built a rep for a sweaty, frenetic live show. The sort of band that stage dive into the pit at a pub while still holding their guitars and when the gig gets shut down the crowd lead a sit-in chanting Twisted Sister’s ‘We’re Not Gonna Take It’ (yes, this actually happened). For fans of Skegss, Dune Rats, Hockey Dad and a bloody good time.

Let’s start with the songs, because they’re vulnerable, relatable, and pretty special: Ruby Markwell writes them, and does her best to draw a thick line of best fit between melodic Brisbane pop and wordy Melbourne punk. Yes - they’re songs in the key of life as a trans woman of the 21st century – but they’re also songs about our gross, universal humanness, about the connective tissue we probably all cry into, about life full stop. Come for the poetic pathos and melodic mousetraps, and stay because you’re going to feel something powerful and real: it’s going to be a big year for The Football Club, one of Melbourne’s most unifying new bands.

Brisbane based producer Max Byrne - who goes under Golden Vessel for his musical output - made some massive strides in 2016 including winning our BigSound competition, touring with the likes of Willow Beats and releasing a debut EP featuring collaborations with talented pals such as Woodes, MTNS and Lastlings. Call it a hunch or just reading the tea leaves but we reckon there's even bigger things on the horizon for Golden Vessel. We already know that the teenage chief of chill has been helping produce releases for LEO and OKBadlands but beyond that he's got a follow-up EP coming soon on a whispered-about new label curated by a beloved Australian musician.

Finally – something for Novacastrians to celebrate besides the ’97 NRL Grand Final. As fierce and as magical as the Andrew Johns short-side scurry that set up Darren Albert with an immaculate try down the blind in the game’s dying seconds, Introvert are an unyieldingly vitriolic five piece forged from steel strings, hot coal, and a heap of leftover emotional driftwood from that time that the Pasha Bulker ran aground on Nobbys Beach in 2007. Birds of Tokyo took ‘em on tour at the end of last year, and they got 4.5. stars from Kingsmill for their bona fide ripsnorter ‘Everything Is Different Now’ too. If you’re into Violent Soho, soaring vocals, or fierce and uncompromising displays of sheer impassioned amplification, you’ve come to the right place. They’re brilliant.

If you're after an immersive, sensory experience, Lonelyspeck's the one to listen to. The Adelaide producer has been turning heads with spacious soundscapes bound together by evocative vocal melodies and direct lyrics. The way they twist around sounds and samples, and turn them into vivid experimental-pop adventures is quite simply pretty special. Lonelyspeck is no doubt producing some of the most innovative sounds you'll hear right now, from goosebump-inducers like 'All My Skin On The Air' to the 6-minute journey of 'Happy New Year'. Keep an eye out for more too; there's a new Lonelyspeck EP due in March.

How's your 2017 shaping up? Some might have fresh degrees or adventurous travel plans ahead for the year but rising Sydney producer swindail has his calendar already all blocked out with a full schedule of killing it. His first assignment for 2017 has been playing support at his hero Mr. Carmack's Laneway sideshows and he's just followed that up with the rubbery 'n bubbly 'Jussrite' produced with Auckland's SACHI and featuring Soulection go-to-guy naji. You'll be hearing plenty more of swindail as the year goes on with a hyped collab that GoldLink called "very, very sick".

On paper, 2016 might look tough to beat for Mackay songwriter Tia Gostelow. After uploading ‘State of Art’ in February she was named an Unearthed High finalist, the inaugural winner of the Unearthed High Indigenous Initiative, played BIGSOUND, added to triple j rotation, got her P’s, started a mentorship with Thelma Plum, met her heroes Boy & Bear, graduated high school and survived schoolies. It’s a testament to her talent that we’re expecting her to go just as big in 2017. And with new music already on the way and her first ever headline tour locked in, it’s easy to see why Tia is worth keeping an eye on.

It's been said that 2017 will be the year of protest songs, but Ziggy has been fighting for what's important for some time now. The Perth-based MC made himself known on Unearthed last year with two powerful and articulate tracks, coupling politically-charged rhetoric with loaded lived experience. Expect an incredible amount of passion in his storytelling, as he tackles issues confronting Indigenous communities around Australia with ferocity. Accompanied by clean beats and solid rhythms, you’ll want to keep an eye on this rising MC.

More new discoveries? We got you boo. Check out some of our staff reviews over this way.