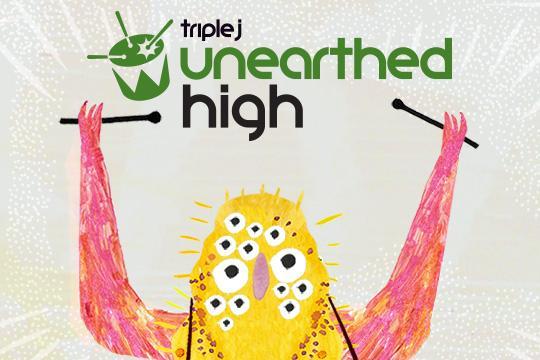 We're gathered here on this web page to celebrate our graduating Unearthed High Class of 2015. What a year it's been!

850 of the best High School artists our wide, brown land has to offer entered Unearthed High this year, submitting more than 1250 songs and impressing new fans left and right as a result of their hard work, persistence, and undeniable talent.

We met new artists from all over the country, from electronic producers from rural WA to dank metal heroes in Western Sydney. We gave them a chance to introduce themselves to you in their own words (see below for more on this). We watched like proud mama birds when they stood up on their own two feet, found some national radio airplay, and then took glorious flight.

As they prepared to leave the nest, we armed them with the best intel we could: career advice from some of our country's finest musical exports, with the promise of more to come. Much learning ensued.

At the end of it all, we crowned a buzzy little band from Perth called Mosquito Coast as our competition winners this year, and we flew triple j Brekky boys Matt and Alex to Perth to surprise them at school. Not to overstate things, but it was a true triumph of the human spirit.

In all truth, though, this was a year full of triumphs. We recieved so many excellent submissions for Unearthed High this year that deserved your attention that we put together a playlist called Unearthed HIGHlights, and now, we're taking that one step further, by presenting to you our Distinguished Achievers List for the  Unearthed High class of 2015.

We've condensed it all into one handy audio yearbook presented by your bois Dave Ruby Howe and Lachie Macara. Hear the full thing below, and then scroll down for our prestigious 'Most Likely To...' yearbook awards.  It's been a ripper year, and we can't wait to do it all again.

Most Likely to DJ the Formal Afterparty: Close Counters - Picture Me

Most Likely To Piss Off Their Neighbours: Burnout Band - Mental Case

Most Likely to Soundtrack a Featurette on Fashion TV: Lastlings - Verona

Most Likely To Return Next Year With More Hot Fiyahhh: Theeves - Sky Tide

We've turned the keys of triple j Unearthed over to some people who are truly in the know about all things High School: a bunch of High School students!

We recruited Chiara, Sarah Jane, and Allegra from Newtown High School of the Performing Arts into a studio to take over the radio and play you some oftheir avourite Unearthed High tracks, and tell you why they like them. Predictably, it turned out to be a very cute hour of radio.

Pick up some after school snacks, take a sneaky insta selfie, and hear here:

Now cop some of the big highlights from the competition, introduced by the artists themselves.

SHINTO - Devotion
I create beats under the name SHINTO that sit somewhere between trap and 808, but with some pretty spacey influences. I try to make music that sends the listener astroltraveling to a place where you’re just going hard.

Hypre - Adventure
I made this new song called Adventure and my primary focus was to make you feel like you’re on an adventure listening to it.

Tyrie X - Where Would I Be

This song’s called Where Would I Be, and it’s about where you would be in life without the people who keep you goin’.

String Elephants - Flourescent
Flourescent is about a special, radiant, girl who stands out from the rest.

Luke Diamond – Let Me Love You
I’ve been DJing since I was eleven and only just started producing recently. I’m more into Melbourne bounce, but deep down I like unicorns.

This song’s about experiencing some bad times, but then kickin’ back and relaxin’.

Spaces – Take Me
I’m 18 years old and I’m in year 12. I guess I’m the classic bedroom producer. I started ‘Take Me’ a couple of months ago – I messaged STEL, and he’s a US based producer, and we decided to collab on it. Then we decided we want some vocals, so we got Sarah from the UK.

Sleeves - U
I write music because it’s a way i can express myself. It’s my passion. It’s what I love doing for me and for other people; especially my friends and loved ones.

Litwicks – Witches in the Sky
This song can be best described as you discovering an altered mindset and seeing the world with a new perception on life. We were looking for a more grunge/blues sustained sound with dual vocals to have a different vocal change and to throw some diversity in the song.

Jasmine Iona - Chase
I’m a sixteen year old studying in Port Lincoln in SA. Chase is a song about how it feels to walk yourself home. It’s complete with a space guitar and a slightly uncalled for saxophone riff.

Make It Count - Beautiful Beneath The Skin
Our song is very important to us and is about self image and being confident in yourself no matter what other people might say.

DEX – Crazy
My name is DEX and I’m a sixteen year old rapper from Melbourne. I wrote ‘Crazy’ about how crazy life can be growing up, and about staying focussed and doing what you love doing.

The Citizens – Where I’ve Been
This came about from us mucking about in rehearsal with our new synth. We found this sound we really liked and wrote a song around it. We went into the studio and we’re really happy with the end result.

Seishun – SVT01.a
The meaning behind this one isn’t very deep – it’s about stress and anxiety relating to school. But the technical side of things, I’m a big fan of merging human songwriting and lyrics with more abstract electronic elements to tell a powerful story. That’s what inspired me to write this track.

Coastal Kid – for Love of EDM
I’m 15, but I’ve been composing since I was only 12 years Old. I first wrote the basic outline of ‘For Love of EDM’ about 12 months ago, it was the first real fully formed and original track to come from the Coastal Kid project. For 12 months it sat dormant in the depths of Ableton Live and about a month or so, from the ashes of the old project, ‘For Love of EDM’ was born.

Ducks – Wasted Days
The project began by a strong influence of Mac Demarco’s solo work, as well as my own desire to create my own take on the surf rock genre through the influence of Jazz and Blues. This song, ‘Wasted Days’, is about wanting to escape from everyday life to somewhere fresh new and exciting.

Atlass – Home
‘Home’ was my first Future Bass/Love Trap song. I just wanted to give a completely different genre a try.

I’m a 17 year old rapper and producer from Sydney, and I’m currently in Year 12. ‘Snow’ is about going through life searching for a certain kind of happiness. I chose ‘Snow’ because I’ve never really seen snow. It’s also very pure and enjoyable in its natural form.

Turbulence was inspired by a friend who was going through a break up, enlightening him on the bright side of things and going through those emotions. It was co-written by Richie Newman from Buried In Verona, and our time in the studio with him was crazy.

I wrote ‘Bermuda’ around a year ago, because I wanted to explore relationships and breakups and I wanted to see how that comes up in other aspects of your life. Specifically, dreaming.

I wrote ‘Cascade’ about the emotions of being unsure of oneself, and kind of combating those emotions. It’s a real smooth tune and reflects a new sound of Ivey.

I live on the Internet on a place called Soda Island. I’d just like to thank you for taking time out of your life to listen to a piece of mine.

We’re in Year 12 at SFX college in Newcastle. We wrote ‘King and Queen’ last year about these people we knew who were acting like hotshots. We wrote a song about ‘em.

Hamburger - Cuddle Up, Settle Down

‘Cuddle Up, Settle Down’ is about long walks on winter days, coming home to something warm, and of course about love. Turn it up, hang around.

We go to St Patrick’s College in Mackay, QLD. This is a break up song, and it’s pretty cliché, but we believe every artist needs and has one.

‘Dancing’ was inspired by some full on nights with a lot of interpretive dancing with my mates. Generally, it’s about spinning twirling and leaping through the air to forgwet about all the negative energy that surrounds us.

Finley Miller - Built Under The Sun

This song is mainly about equality. That, and sun safety. I wrote it while I was eating a pizza. It was really hot.

I busk for an income, so I’m used to having an acoustic guitar in my hands, but with Minorfear, I get to experiment with the production side of things. ‘Picturesque’ was inspired by these images of Northern Europe and how pretty it was, so I wrote a bunch of lyrics about it and made a song!