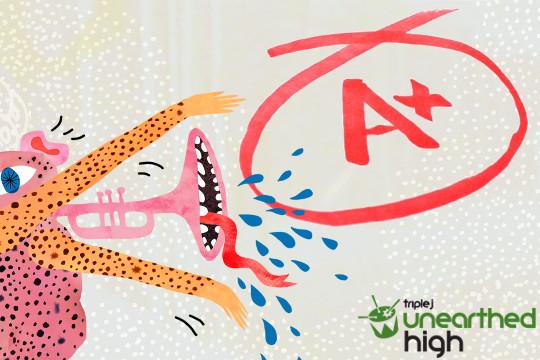 Time's ticking - there's less than ONE week to go to throw your hat in the ring for Unearthed High 2018! Isabella Moore is back with her weekly wrap on The Unearthed High Report Card.

And this week you're gonna hear a new track from KIAN who's channelling a real Dean Lewis vibe, plus music from an act that opened up for The Smith Street Band's Wil Wagner recently (woah - killin' it already).

If you're in high school and you're sitting on a tune, add those final touches and chuck it up onto triplejunearthed.com to score the chance to win flights to triple j to record, remix or master your song and have it all over the radio.

Entries close midnight Monday 30 July. But for now, hear more from these talented teens below.

Bridget Allan - Attrition Of A Daydreamer

School: Elisabeth Murdoch College, VIC
Sounds like: Camp Cope, Hop Along
Izzy says: If you're a fan of Camp Cope this is going to be right up your alley.

Jessie Hillel - Talk About Us

School: VCASS, VIC
Sounds like: Frank Ocean, SZA, Odette
Izzy says: I was really in love with this on first listen, it grabs you straight up with the funky intro it's got going on.

Brewer - Dawned On Me

School: Newtown High School of the Performing Arts, NSW
Sounds like: Woodes, Banks, FKA twigs
Izzy says: Brewer was one of my favourite entries last year! This one's got a really dark pop vibe going on.