Unearthed High: What Do You Win?? 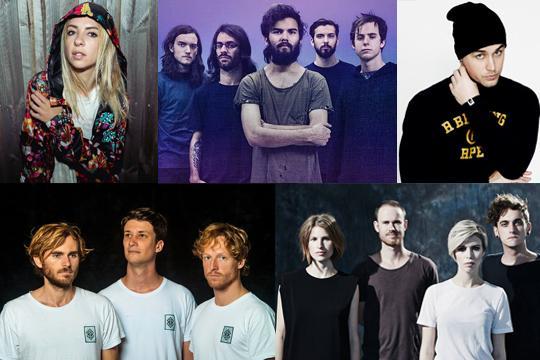 There's only a couple of weeks left until it's pencils down for Unearthed High 2015, and already there have been some killer entries from teenagers right around the country.

Given the huge number of impressive tracks uploaded to triplejunearthed.com so far, we're super excited  to announce that we're beefing up the prize triple j is offering to the winner of Unearthed High this year.

You probably already know that if you win, triple j will come to your school, plus we're going to fly you to triple j  to record, remix or master one of your tracks.

This year, though, we’re stoked to tell you we're also teaming our winner up with some of the best performers in the country and the management that has helped them get there for some professional advice. We know Unearthed High is a crazy ride, so for the first year after you win, you're gonna get  some fair dinkum knowledge juice from some of Australia's best to keep you grounded, give you advice, and help you  navigate the next steps in what is hopefully a very long, very prosperous career. Think of them as your Career Advisors for Unearthed High 2015.

We're not talking "practise makes perfect" advice, either: this is real-time, experience-based, situation-specific insight from artists who have genuinely been there and done that.

So who could you be learning from? Let's meet 'em.

Alison is one of Australia's best and most popular purveyors of electronic music. She's hit her straps hard in the past eighteen months, coupling a fierce international touring schedule with warehouse parties Australia-wide and a standout debut album, Run, released earlier in 2015. If you're our Unearthed High winner, you can cop some serious knowledge from Alison and her manager Chris Murray as you build your own career.

"You don't need a fancy studio to record your music," Alsion told us. "All you gotta do is think outside the square, don't compromise yourself for anyone, and use your ears, your brain and your heart."

Australian hardcore heavyweights Northlane are smashing it all over the place right now. Their new record Node is out at the end of the week, and it's the Feature Album all this week on triple j. They've been together for six years, and in that time they've racked up heaps of valuable experience in the Australian music industry that they - and their manager Luke Logemann - can pass on to you.

"Don't eat a huge burrito before you go on stage", the band's guitarist Josh Smith told us recently. "I've made that mistake before and it didn't end well. It's really important to take care of your health on tour."

We Unearthed Art Vs Science in 2008, and all they've done since then is sell out gigs across the country, release a heap of inventive, synth-driven, party pop music, and score a #2 placing in the Hottest 100 for 'Parles Vous Francais'. We're giving you the opportunity to pick the brains of Jim, Dan and Dan - and their manager Claire Collins - if you take out Unearthed High this year.

The Jezabels started uploading to Unearthed in 2009, took out our Field Day competition in early 2010, and were nominated for the Unearthed J Award later that year. Working with manager Dave Batty, they've also got two triple j Feature Albums, an ARIA and a ton of intel under their belt to share with this year's Unearthed High winner.

Yr pal Illy Al is one of the country's finest emcees. He's released four studio albums since 2009, and keeps on pulling punches - his track 'Tightrope' ft Scarlett Stevens scored a #17 placing in last year's Hottest 100 - his highest ever. Working with manager Nick Yates, Illy's quickly become one of the country's most lauded voices in hip-hop.

"Get your soundcheck right!" he told us. "There's no quicker way to f*** a gig up than to be a legend and yell: "turn my shit up, sound man!" during your show. He's not going to. It'll just make you sound like shit. Keep it in mind."

Catch up on some of the best #UnearthedHigh tracks uploaded so far this year here. Full details on how to enter the competition over this way.