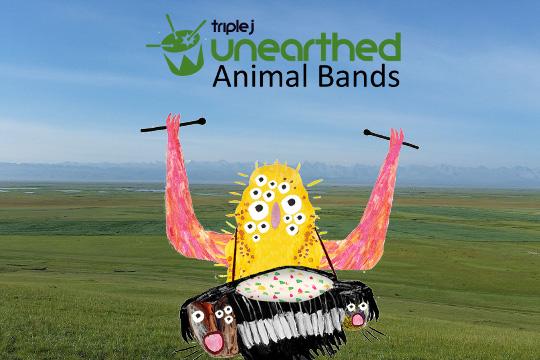 It's a little known fact but over the past decade a whole bunch of animals have started uploading music onto triple j Unearthed. When we launched all those years ago it was mostly big ol' humans but guess what? There's not a damn thing in the ABC T&Cs that says animals can't be part of triple j Unearthed so we've opened our arms and embraced it. Wolves, Eagles, Rabbits, Bats, Rats and more, these are the very best songs made by animals on triple j Unearthed in recent months.

Coffin Wolf
Usually (at least in my experience) putting a wolf in a coffin is a recipe for disaster but in this instance it’s proved to be a resounding victory. Coffin Wolf have surprised everyone by stuffing a literal wolf in a literal coffin and still coming up trumps. Many have tried it, few have succeeded but this wolf and this coffin? It’s a match made in heaven / under nine foot of dirt. You can hear every soily granule in the gravelly vocals and the sandpaper guitars.

Adrian Eagle
Adrian is not an eagle. That’s the first thing to come clean on here. All the other bands we’ve listed are real animals but Adrian is not. Adrian’s moniker caught hold back in ’96 when he managed to nail an eagle on a particularly difficult golf course just South of Sydney and he’s lived by the name ever since. His wicked silky voice floats on eddies and currents just like he does, winged and beaked. Ok I lied before, he is actually an eagle, sorry.

Rabbit Island
Well, Rabbit Island differs from some of the other animals in this list in that it’s actually an island which as far as I know isn’t classified as an animal. What’s on the Island though? An absolute bucket of rabbits. Like, so many rabbits. Maybe too many rabbits. This Island’s real name is Amber Fresh and she makes electronic visions that are wonked off their chops. It’s challenging and bewdiful, all the things we like from our islands and our rabbits and our Rabbit Island(s).

Batts
Bats! Now there’s an animal you don’t hear about all that often, and frankly I’d prefer to keep it that way because bats are gross as hell. One time I got one caught in my rucksack whilst when it tried to eat my Tangelo and honestly I just binned the whole rucksack. Not worth it. This Batts though, this Batts is the good kind, the kind that makes heart rending folk with one of the most ensnaring vocals you’re likely to hear this week.

The tommyhawks
Point of difference here is that these animals have been given proper names and all of them are called Tommy. That must get pretty confusing. Probably, and this is a big probably, they've all been born under the same name as they all had a similar penchant for making hard to classify surfy-rocky-rootsy band sounds. Terrific birds, really quite good birds.

Good Doogs
This name is a bit of a misnomer because everyone knows that all Doogs are good Doogs. I guess these might just be particularly Good Doogs. I’m gonna allow it. The Doogs’ new track ‘Nothing To Do’ is a total ripper, somehow pairing idleness and wild energy together for primo effect. And don't get mad about it but yeah, they're dogs and there's a typo in their name.

Tobacco Rat
Here’s a fact for you, Rats are immune to lung cancer. So whilst I have to very firmly advise you, human, not to smoke under any circumstances this rat can chug down a full pack of [cigarette brand] with little to no repercussions. This particular rodent is a fume gobbler of reknown, pulling in that dirty brown smoke, swilling it about and pounding it out and thick veined electronica.

Bilby
Given that it's one of the mostly iconically Aussie animals, it's not surprises that this Bilby is in turn iconic and very Australian. One of the most impressive feats of this rapping marsupial is it's capacity to deliver such cleverly spat lyrics through such a tiny little nose/mouth thing. Also how cute are Bilbies? No exception here.

Catlips
Yuck. Cats don’t even have lips, they’ve just got those wet bits around their whiskers. Don't even start me. That's the sonic vibe though, wonderful skewed beats from this feline mouth zone. It's even enlisted Perth's Kucka (a regular human) on this track.

Wolfjay
ANOTHER WOLF!? Well yeah, duh, wolves are notoriously musical. Remember An American Werewolf In London, the film about a lupine beatmaker who moved from La to the UK to pursue his career as a club DJ? Me neither. Probably a great film though. No surprises that this here wolf follows his bloodlines and offers these delicate flowers, crafted from his furry soul. Very nice, very good.