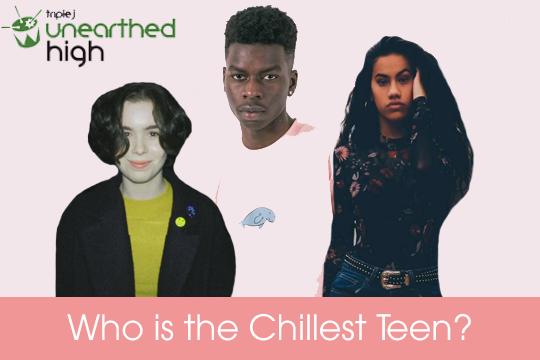 By now, you’ve probably heard about our five finalists for Unearthed High in 2017. The competition has been real tight and we’re as excited as you are to find out Who Is Going To Win later in the week.

When we’re talking Teens, it’s handy to know that Chill is both an extremely important to possess and also an incredibly hard thing to measure - especially because objectively hot songs can still be Chill af tunes.

So -- who’s the Chillest Teen musician in the country? Let’s meet some contenders.

Chillest quote: “'Tranquility' is for the young lovers. I like being poetic when I’m writing my songs so this is a song for the ladies."

Overall Chill Assessment: In the right context poetry can be very Chill, and based on our understanding of both human emotions and literature, young love might be one of the Chillest things to poem about.

Verdict: This is objectively a very Chill Teen.

Chillest Quote: “I’m 17 in the physical, but ageless in the spiritual.”

Overall Chill Assessment: Let’s start here: billymaree is so Chill that she don’t even have time for capital letters. It is evident that Grammar, Syntax and Punctuation are decidedly Not Chill. Her music is like mercury at room temperature, like soufflé, like a cloud you could fall asleep inside of and dream only of marmalade sunsets.

Verdict: If you were to consult the Wish Man and wish for him to show you a Chill Teen, billymaree would materialise in front of your eyes at her own steady pace. It’d be pretty Chill.

Chillest Quote: “Get peace of mind, get a piece of light, and take flight.”

Overall Chill Assessment: You might know Taj best as a 2017 Unearthed High Finalist, but he should also get special mention here for being incredibly Chill. ‘Beat The Keeper’ sounds like the ‘70s, easily the Chillest decade by all measurable standards. His voice is soft as true love’s first kiss, but also wise as a golden oak. Very Chill.

Verdict: It would be pretty hard to find a Chiller Teen than Taj Ralph, however, there are some more Chill Teens to follow in this article. We have not finished our deliberation just yet.

Chillest Track: Down For Me (ft. Cat Strat)

Chillest Quote: “I know I’m worth it, this ain’t your burden, please reverse it”

Overall Chill Assessment: Is downtempo RnB the Chillest genre of music? It’s impossible to say for certain but Rebecca Hatch makes a strong case. ‘Down For Me’ drips self-assuredness – but not in an Unchill way. More in a “sup, I know I’m a Chill Teen but I’m keeping very Chill about it” kinda way.

Overall Chill Assessment: One thing that’s not often said about being a Chill Teen is that sometimes it’s real Chill just to say exactly what you mean and nothing more. That’s exactly what Tilly Murphy does on ‘YUK!’, a lo-fi (NB: lo-fi is so Chill) song about being sick and having boogers. The chorus goes: “Yuk yuk yuk yuk! Yuk yuk yuk yuk!” And then the song stops after about two minutes. That’s Chill.

Verdict: I did not know that being Yuk could also mean being Chill but FRITZ is clearly incredibly Chill and I hope she got better from her cold. Influenza is definitely not Chill and it should go away.

More Chill Teens? We got plenty. Head over here for more from Unearthed High.