Raised Fist, Every Time I Die, Deftones, Converge, Will Haven

Deftones, Raised Fist, Converge, Every Time I Die, Will Haven

A 4 piece Hardcore/Metal band from Bendigo Victoria, formed in 2008 and erupted onto the music scene with a unique take on the broad Hardcore/Metal genre. Street cred mainly hailed from the band being a relentless and entertaining touring machine with gritty riffs, energy and aggressive conviction!

The everywhere and anywhere attitude towards touring, playing shows and showing the world the music that they have crafted has landed the boys some amazing opportunities, note-able supports, festivals, international recording opportunities and even product endorsements. All just for doing what they love is the best part keeping them both humble and motivated.

Spending the majority of their time on the road and working full time jobs the boys have still managed to collaborate and release the Albums "Entities" and "The Warehouse Sessions" featuring singles such as "Bomber", "Remnants", "The Weight Of Existence" and "Waves". Even the stand alone single "From Here". These tracks have topped the charts in Triple J's Unearthed, Bandcamp, ReverbNation and received plenty of airtime on multiple radio stations including On-line, Local, National and International.

ABREACT have been fortunate enough to support some amazing bands including: The Amity Affliction, Northlane, Mnemic (Europe), Feed Her To The Sharks, Unearthly (South America), King Parrot, Hellions, Texas In July (USA), In Hearts Wake, For All Eternity, Hand of Mercy, Superheist, Frankenbok, Bam Margera - Earth Rocker (USA), CKY (USA) and many more!!

"ABREACT show no surrender in this anthem of resistance against the oppressive capitalist society we live in. Mat’s lyrics may be lacking the subtleties heard in ‘Entities’, but the topic is confronting, the music is in your face, so why shouldn’t the lyrics be blunt and to the point? Now there’s one aspect I haven’t mentioned yet, and that’s Lee Chatterton’s riff-flavored icing on the cake, complementing every other aspect with a touch more intensity and holding the package together tightly through the breakdowns and bridges. ABREACT are still the epitome of Australian hardcore in my eyes, and are well set to maintain that position with their new line up" Regan Boyce SF Media.

"ABREACT's 'Entities' is straight up amazing and easily one of the best Australian releases I’ve ever heard, the world needs to hear ABREACT and they need to hear it now. Overall: 9/10" - J Ewings, Australian Musicians Network.

"On 'Entities' ABREACT combine the old school hardcore attitude with a modern metal sound. What you’re left with after that is something insanely heavy and yet is enjoyable and has mass appeal, a perfect combination. The passion and power behind it just sticks with you" Regan Boyce SF Media

Bendigo 4-piece Abreact are one of the winners of our Groovin The Moo competition. The hardcore/metal 4-piece will be playing the triple j stage of Groovin The Moo Bendigo this Saturday May 4 at 11:40am. Raaawwwkk!

Our music has developed a lot over the years. We all have different tastes, but also enjoy a lot of the same bands and styles. We believe if something is good, it's good, it doesn't need to be pigeon holed into any particular scene or genre. So as our tastes have evolved over the years so has our sound. However it is the predominately heavier stuff that rubs off on us the most. Bands like Converge, Raised Fist, Will Haven and Deftones give us great inspiration.

You’re the winners of our Groovin The Moo competition and will be joining the line up at the Bendigo leg of the festival. What can Groovin The Moo punters in Bendigo expect from the Abreact live show?

We are extremely excited to be a part of the Groovin The Moo experience! The lineup is fantastic and so is the idea behind the event, servicing regional areas, something we feel very strongly about. Punters can expect a lot of energy, conviction, honesty and fun in our set. We love to play!

Who or what are you most looking forward to at the festival?

Seeing and meeting some other Unearthed bands will be great as we will all be extremely excited and understand what each other are feeling on the day! The lineup is so great but to mention a couple, The Bronx and The Amity Affliction are ones we are definitely looking forward to!

I imagine it is the same as any other rural town. There is only one venue in Bendigo that has supported Heavy Music consistantly, The Newmarket Hotel. The Musicman is a good supporter too, hosting many all ages shows every now and then. It's a struggle for support as most venues will only have cover bands or indie bands/acts. However this only helps all the bands to stand together even more than usual and help each other out.

We are about to release our debut film clip for our song 'BOMBER' so that is very exciting. We have just completed the first leg of the Regional Roulette Tour with Frankenbok, King Parrot and Heaven The Axe. The response has been fantastic and we have another 5 dates to go which include Dreadnaught. Very honoured to be part of this lineup! As always we will be squeezing in as many shows as possible and we are also looking to do a tour towards the end of the year including Perth and Tasmania for the first time. 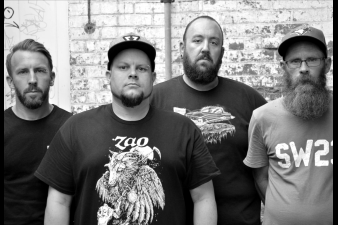 Congratulations to our 2013 Groovin The Moo winners!

This is ginormous! ABREACT pull no punches on this new belter.

This is ginormous! ABREACT pull no punches on this new belter.