I'm Wergaia/Wemba Wemba person from Western Victoria and now living in the Kulin Nations (Melbourne). I like making sad music and jokes about myself.

It's National Reconciliation Week and we'd like to introduce you to Wergaia woman, Alice Skye. Her new single 'friends with feelings' is captivating. Discover it out here.

Read Interview
Tell us about your music. How did you develop your sound?
I guess that’s still something I’m constantly doing. The songs on my album were mostly songs I’d held onto since I was a teenager and so much has changed since then. I did grow up listening to a lot of piano-driven, female-fronted music but now I play with a band of twins that I grew up with and making music with people I’ve known for so long has been such a gamechanger for me. It gives me more room to play with arrangements and sounds which is fun
What’s your greatest source of inspiration for making music?
Lyrics are everything to me. I do write a lot about what’s happening to me at the time. But also I’m the sort of person that spends a lot of time sorting through old emotions and dealing with stuff I maybe should have years ago. Songwriting started as something I would do for my own sanity I didn’t really expect to be sharing them with people when I wrote them
What can punters expect from an Alice Skye live show?
I get told a lot that people have had a good cry during our sets. Not that I want people to cry, but it’s really nice knowing people are relating or connecting to the music. We play some heavier stuff that you could probably have a sway to, we call it 'Contemplative Rock' but I honestly don’t know what genre we’re playing.
What’s the best advice you’ve been given and who was it from?
Wow, that’s hard to narrow down. I feel really lucky to have grown up with so many strong women around me, especially strong Blak women. I was raised by a single mum, have 2 sisters and them along with my Aunties have always been examples of strength to me. I feel like their existence is just constantly feeding me advice.
What Australian track would you play to cheer up someone who was crying?
'Sunsets' by Powderfinger for reflection and 'Shade Away' Electric Fields for distraction.
What Australian track would you play to someone to make them cry?
That solo version of 'Heavy Heart' that Tim Rogers does or 'Where I Stood' by Missy Higgins.
You’re the DJ at a party. The dance floor is pumping. What Australian track do you put on next?
At the moment maybe 'My People' by Remi or 'Savage' by Jesswar.
What was the last local gig you went to? How was it?
I watched Precious Earth perform at the Post Office Hotel last week, they’re also on Unearthed and they’re such angels on and off stage!
Tell us about the bands or people in the Victorian music community that inspire you.
I really love songs that tell stories and two people that come to mind are Uncle Archie Roach, who is just one of the best storytellers and most inspiring person. And I have to say Missy Higgins too because she’s basically the only reason I wanted to learn how to play piano.
What are your plans for 2018?
Heading on my first tour in a couple of weeks with one of my best friends and amazing artist Emily Wurramara, can’t wait! Also going to get back into a studio and start recording some new stuff
View Profile Hide Interview 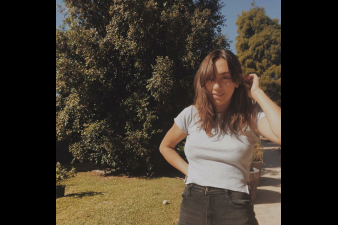 The Skye's the limit
More

you're an expert when it comes to music of the sad, Phoebe Bridgers-y variety but your voice brings an undeniable and inescapable warmth and lightness that's so comforting.

you're an expert when it comes to music of the sad, Phoebe Bridgers-y variety but your voice brings an undeniable and inescapable warmth and lightness that's so comforting.

it's like alice skye is on the couch spilling her guts, telling you exactly what's on her mind and it's a privilege to be in the room hearing it all. i love the openness and resolve she offers up and the way this swells with grace.

it's like alice skye is on the couch spilling her guts, telling you exactly what's on her mind and it's a privilege to be in the room hearing it all. i love the openness and resolve she offers up and the way this swells with grace.