There is a reason why night clubs play the music they do: it's the right tempo for dancing, it's got hook lines you can sing along to, and a beat steady enough hypnotise. Art vs. Science not only makes the sort of music played in nightclubs; it is one of the few outfits in Australia which can actually play in night clubs - live. No laptops, no backing tracks, just drums, keyboards, synths and three sets of funky hands. "An expression of their long immersion in the dark, seedy recesses of club-electronica", Art vs Science breathe fresh air into the genre, with an immediate, breath-taking live show, and songs that sound pleasing, joy-inducing; as if meticulously designed, element by element, to intensify user stimulation. Art vs. Science plays, people listen. And they *understand*.

No laptops, no backing tracks, just drums, keyboards, synths and three sets of funky hands. They've just won a spot on the mix-up stage at Splendour at the Grass including flights and accommodation. Congratulations!!

Art vs. Science are the winners of our 2008 Splendour in the Grass competition. They will play on the mix-up stage with the Presets, Lyrics Born, and Bluejuice.

A punter from one of our gigs described us as "Daft Punk playing Livin' on a Prayer". If you can imagine that, you might be a bit closer to getting our vibe. It's electronic dance music, as you might hear in a nightclub, all played live. We've got two old keyboards running through big guitar amps cranked up to 11, a couple of classic synths spacing it up, a hard hitting drummer up the back banging out the beats, and hooky lyrics up front you can yell along to.

We started out with a "jamming only policy", where we only play stuff that we come up with in rehearsal jams. DW, Jim and myself have played music together in one form or another since early high school so we've got a good musical connection. Lately I've been coming to rehearsals with an idea or two and working on them, but the stuff we come up with on the fly is often better because, naturally, any groove we fall into through the jam and want to keep going is always going to sound killer.

Basically, if everyone in the room isn't going mental by the end of the set we're not doing our job. We work out different live sets depending on what time of night we're playing. For late night sets when everyone is right into it and just wants to keep dancing, we arrange our songs so that they are played mostly back to back, with segueways, builds and drops, much in the same way that a DJ might play his set, except we're playing all the music then and there. It goes off. Earlier on we just play the tunes one at a time. Sometimes we jam on stage, depending on the crowd. We just feed off the audience - they give us energy and we give them energy. Live music is a beautiful thing.

You've not been together for long, what were you doing before this?

While Art vs Science has not been around long, we've been playing together for ages. We've all been at uni, playing in many different bands. We played in a rock band for a long time, paying our dues, doing every gig we were offered, many crappy ones among them. We did a lot of good gigs too though. We played at nearly all the college events at Sydney uni - they're always the best, everyone's drunk and having a great time. Plus if you're lucky you get a place to stay for the night. I had a Jimi Hendrix moment at our EP launch in late 06, playing Waltzing Matilda on my guitar to a sold out room. That was pretty special. It was a great way to cut our teeth in the live music scene.

What can people expect from you at Splendour?

More than they were originally expecting. Strange noises, go go dancers; a show that will take you on a journey through new places and have you jumping up and down with the rest of the crowd.

Sooooo much better than most of the stuff coming out of the States at the moment. Sometimes I just can't watch music video shows anymore - every week there's some new, stupidly autotuned track out by the lastest RnB star, saying the same old crap about how tough and sexy they (with a video that is pretty much a porno). If it's not that, then it's some whiney, emasculated white band singing about how weak and pathetic they are. At the very least the Aussie stuff has either some balls about it or some genuine truth that is trying to be conveyed. At its best you've got artists like the Presets, Angus and Julia Stone, Wolfmother and the Midnight Juggernauts flying the flag proudly for Australian music. It makes me so proud to be sharing a bill with some of those outfits at Splendour in the Grass and, hopefully, with some good luck, at other festivals in the future. It's funny, we had all bought our tickets to Splendour already and were just planning on having a great weekend. Now we're actually playing there. It's going to be a pretty amazing couple of days. 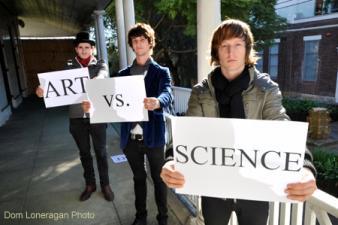 Congratulations to Art vs Science!

They'll be opening the main stage of Splendour In The Grass 2008
More
Download the triple j Unearthed app: