Adelaide. There’s no time to wallow in the mire. If you do you’re just gonna get sucked away. Sucked up north through the city’s decaying fringe, past the closed Mitsubishi plant, past Snowtown, past Port Augusta and into the dry red nothingness. Bad//Dreems know this. That’s why they got together the summer before last, sweating out their hangovers in a warehouse next to the West End Brewery. Sure the trams stopped here in 1958 (cf. M. Easton 2013), sure venues keep closing, sure the good bands keep leaving for Melbourne and sure, you gotta keep paying the bills. But just have a bloody crack and then keep on chooglin’ (CCR 1967). Then again, you scratch the surface here and you find another world, far removed from the leafy inner suburbs. From the port with its decaying factories and rusty Chinese tankers to the forgotten northern fringe with its salt plains and dilapidated greenhouses. The empty jail on the edge of the city. A decade long bikie war. The Family. This is the weird murder capital. The weed capital. Badlands. It is this world, constructed or not, that Ben Marwe (vocals, guitar), Alex Cameron (guitar), James Bartold (bass) and Miles Wilson (drums) attempt to capture in their debut EP, Badlands. Mundane meets morbid; the humdrum meets the horror; nostalgia meets nightmare. Big dreams meet bad dreams. The EP is the result of sessions with producer Woody Annison (Black Cab, Rocket Science), and also includes debut single Chills, recorded with Jack Farley (Twerps, Scott and Charlene’s Wedding, Beaches) and Johnny Mackay (Fascinator, Children Collide). Badlands represents the first cohesive picture of Bad Dreems’ sound, which draws from the Australian underground of the late 70s and 80s, while also taking cues from US indie outsiders like The Replacements and Wipers. Despite the darkness and neuroses that Badlands explores, there remains a stoic optimism. You can’t afford to wallow here. Times might be bad but there’s something better around the corner. The schooner’s still half full. Badlands is out now through Mirador Records. “Heartfelt vocal with a ragged edge, driving melodies, solid guitar work. This is a great tune”  Zan Rowe, Triple J “Continuing to divide audiences with their power garage rock and choice of covers (My Pal), we are firmly in the pro-camp.” – Andrew Mast, The Music “We didn't know much about Bad//Dreems when we walked into Ric's Bar but we were big fans by the time we left.” – Channel V "Adelaide four-piece Bad//Dreems are one of the best Australian bands at the moment..." – WhoTheHell  “all I know is what I hear and I hear goodness.” -  Weekly Tape Deck    “There are still outsiders in Australia, still parts of the country that escape our attempts to tame it” - Adam Curley, Street Press Australia     “One of our favourite global bands” – Doubtful Sounds    “He may be yearning for the dark and dreary, but this is just sparkling and excellent pop." - Mess + Noise     “The sound reminds me a bit of Paul Kelly (on a downer), ...or of this rad Melbourne band Twerps.” - Radar Radio    “Their stage presence is so grungey, so sleazy, so badarse and so apathetic; it's fantastic!” – 4ZZZ    “Bad/Dreems isn’t just another Adelaide band; they represent the melodic, the tough and the spirited of that much-maligned city” - Patrick Emery - The Brag/Beat    “The sunburnt ginger in me loves this record as much as the hipster.” - Soundly Sounds    “I'm going to say it here and now – these guys were the highlight of the first night of BIGSOUND.” – AAA Backstage    “Adelaide’s Bad//Dreems are on the up, and with a huge local following already achieved within the first year”. - Tonedeaf

Adelaide band Bad Dreems are our Feature stars. They're all about 90s guitars and bittersweet pop. Hear their Flying Nun influenced sound on triple j Unearthed and Unearthed on digital radio all week.

We just got together to play at a friend's party when the band arranged he had dropped out. We practiced once in this fridge warehouse across the road from the West End Brewery and we enjoyed it so we decided to keep going. The warehouse is really echo-y so it lends itself to loud intense songs. Everyone brought a little something to the table. We mainly just wanted to concentrate on having good songs rather than a particular new sound - just guitar music and all the sounds that come along with that. Not too many bells and whistles. After a while we didn't always practice in the warehouse and practised at one or other of our houses. So then we wrote some songs that aren't so intense. More like love songs.

We enjoy them. We hope other people do.

No one gave us this advice directly directly but We learned it from observing our friends who make good music or art and that is to just get out there and do it; don't sit around waiting but write songs, start bands, organise your own shows, meet other bands, make videos. Get involved lad!

Tell us about the bands, producers and people in the Adelaide music community that inspire you.

One of the reasons for starting the band was that there was not much going on here at all that we found inspiring. I (Alex) had moved back from Melbourne and was a bit bummed about that. But then I discovered some cool bands/artists like Hit The Jackpot, Bitch Prefect, Peak Twins and Terrible Truths. Then they all left, mainly for Melbourne :(. But easily the best band in Adelaide at the moment is Old Mate which is Pat from Bitch Prefect's band. They are a seven piece band that sound like Street Hassle-era Lou Reed if Lou had grown up in Gawler rather than New York. But Pat is moving to Melbourne too...There was a label here in the 80s called Greasy Pop that released a lot of great stuff, like Bloodloss. Because there was not much going on we just wanted to be different. A lot of the bands we are inspired by like The Clean, The Go-Betweens, The Scientists etc. developed the way they did because they didn't feel they could contribute to what was going on around them and just wanted to do their own thing. DK from The Metro (a new-ish venue) is pretty inspiring - he books the bands there and has really created a good place to play and to have bands from interstate visit.

We are doing a show with Wavves and then we are planning to make a couple more videos for some new songs and also record a heap of new songs with our mentor Jack Farley. 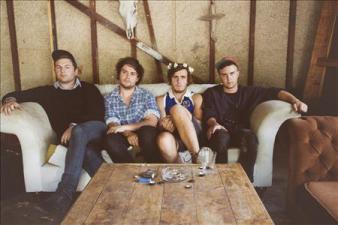 Congratulations to our 2014 Laneway Festival winners!

Even more good stuff from you guys; here you've managed to capture a classic Australian sound and make it your own. Ace.

Even more good stuff from you guys; here you've managed to capture a classic Australian sound and make it your own. Ace.

Would that be a tribute to the NZ band. Can definitely hear the influence, but it's not simply retro-fawning. Great guitars and melodies.

Would that be a tribute to the NZ band. Can definitely hear the influence, but it's not simply retro-fawning. Great guitars and melodies.