We're the Belligerents, a five-piece band from Brisbane.

Our newest single is called 'Looking At You'. The track was produced and mixed by our bass player, Konstantin Kersting at Airlock Studios in Brisbane.

In 2012 we won a spot playing at Parklife in Brisbane from Triple J / Triple J Unearthed which was an unreal experience. Over the past two and a half years we've been lucky enough to tour with and support some of our favourite international and local acts, including Metronomy (UK), Neon Indian (USA), Breakbot (France), Van She, Last Dinosaurs and San Cisco.

The Belligerents are an indie/dance 5-piece from Brisbane and one of the winners of our Parklife competition. They'll be whipping the early crowd into a frenzy at Parklife Brisbane on Saturday 29th September.

We all met because we were hooking up with each others sisters, which is kind of awkward. We started jamming on a few songs that Lewis had written and then slowly started finding our feet and developing our sound. We all have different influences and tastes in music and it all sort of falls into place when we play together. Our first EP is quite different from our latest one and I think that our sound is going to continue to evolve over time. Kind of like Pokemon just different.

You’re one of the winners of our PARKLIFE competition. What can Parklife punters expect from The Belligerents live show?

Smoke machines, full frontal nudity, strobe lights and fun in the sun for the whole family. We're gonna try our hardest to put on the absolute best live show we've ever played and make it worthwhile for the people that come and see us.

What most excites you about playing and attending Parklife 2012?

The line-up is massive and we're incredibly stoked to be a part of it. We love Tame Impala and I'm pretty sure Lewis and Andy have some weird/semi-creepy band crush on The Presets, so we're definitely going to have an awesome time watching them. It's also going to be a lot of fun playing on such a huge stage because we'll finally have room to move around and bust out our dance moves.

I only moved over here in 2007 so I think the first proper gig I went to was Splendour 2008, which was mind blowing. I can't remember much but I'm pretty sure it was one of the best festivals I've ever been to.

First of all Parklife!!! Then we’re playing Valley Fiesta in Brisbane with Arrested Development in October. After that we will be back on the road towards the end of the year around November for a tour support and we’ll also be going back into the studio later this year. 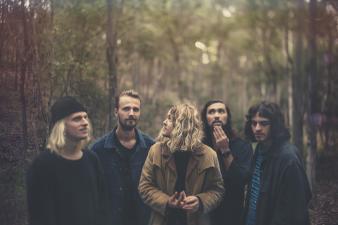 Just love this song in every way, but particularly that build and guitar stabbing explosion in the final couple of minutes. What a beauty.

Just love this song in every way, but particularly that build and guitar stabbing explosion in the final couple of minutes. What a beauty.

Personally I think this is the best thing you've done. Creepy, inventive and brilliant.

Personally I think this is the best thing you've done. Creepy, inventive and brilliant.