Yeah Yeah Yeahs, Queens of the Stoneage, The Dead Weather

Bloody Lovely Audrey are four people who like to get together to make noise. Their music comes from a raw place, and that's immediately apparent when you hear them live. It combines primal beats and driving riffs with the mesmerising vocals of ..., who flits between alluring melodies and banshee-like screams and back again before you know it. It's primal, passionate and drenched in sweat. It's single-minded, balls to the wall, rock'n'roll. It feels so good it can't possibly be good for you. It's about flipping the middle finger to anyone standing between you and a damn good time. In 2010, they released their debut EP "Animal", to great success on the Triple J Unearthed charts. Two songs lifted from the EP staked out top ten spots for weeks in a row, which lead to BLA winning an Unearthed competition to support Aussie hip hop leading man Urthboy during his regional tour. This in turn lead to spots on regional festivals such as Newton's Nation and Village Fair, playing alongside Australian music luminaries such as Birds of Tokyo and You Am I. In early 2011, the film clip for their track 'House of Horrors' debuted on the ABC's venerable music programme RAGE. Never content to rest on their laurels, the band gigged constantly, including supporting American proto-punk legends The New York Dolls. A punishing work ethic then saw them head to the famous BigJesusBurger studios in Surry Hills to record their second EP with Producer Evan McHugh (Grinspoon, Jet). Their sophomore effort, titled 'Four Dark Eyes', is sexier, harder and heavier. It promises to make people sit up and take notice when it's released in 2012. On stage, they form a musical whirlwind. It's powerful, destructive, and you just can't help getting caught up in it. 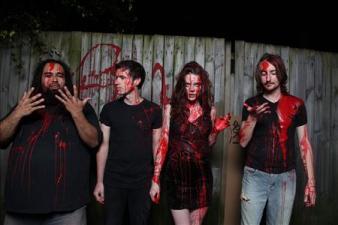 These guys will be joining Urthboy at the Indent regional shows.
More

This is good, dark and pretty furious. Nicely done.

This is good, dark and pretty furious. Nicely done.