Andy Warhol., Leonardo Da Vinci having crazy sex with, Pablo Picasso, whilst being filmed by

Play every Blud song backwards at least once in your lifetime.

It's nasty and melodic all at once. Like if The Rapture met Dukes Of Windsor and had a disco battle - Blud are an Unearthed High 2010 finalist from Wesley College in Perth, WA.

C: Plenty of thought went into our sound. The main idea was to try and please as many different audiences as possible. We looked at what was ‘cool’ for people to listen to, and what people actually liked to listen to, and made a blend. Thom and Robb are quite theatrical, so they influenced me to steer in that direction musically. That’s why I grabbed obvious influences, vocally, from Freddie Mercury and Michael Jackson. Also took a little Pop writing-style from Britney Spears and Lady Gaga. And it works.

T: I grew up in Kalgoorlie, where Jimmy Barnes pub covers are considered to be "popular music" but when I moved to Perth in 2007 I started playing in several different cover bands with Robb. I used to do classroom music but gave it up last year because I believe if you institutionalize music it becomes stagnant and boring...(just kidding, I sucked at it). R: I grew up in the slums of Manning in Perth, not that you needed to know that but it makes me sound like I'm from the ghetto like Thom. I do TEE music at Wesley but lately I haven't learnt much seeing as I keep falling asleep in class. I often sneak around the music department dressed as a cocoon.

T: We've all played live shows before but never together as Blud. Given that we've all been best friends for a few years, and music is often a topic of interest, we've all compiled our ideas for a live show into a shiny orb of memory and trust (SOOMAT). Having all tried our hand at acting, we have developed a taste for the theatrical and absurd and we want to incorporate it into our setup. Because we're all funny guys/fucking idiots we also want to include a lot of humour and wit.

R: We only have like $20 split between us, so probably figuring out how to get some dosh would be our first step. Seems we’re all ninjas, we’re too busy fighting crime in the underground of Perth to find jobs. T: Cote is actually from the future, but he is forbidden to speak of it because we've already agreed that having information about the future can have disastrous consequences. Even if you're intentions are good, it can backfire drastically. C: What Thom said. And Robb. 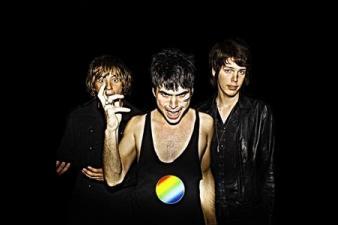 Congratulations to our Parklife 2010 winners!

These guys will be getting the party started in their state.
More

All out stomping electro anthem, bit of the Dukes of Windsor sound in the vocals department (nothing wrong with that snarl), this is super fun and super catchy. Radness.

All out stomping electro anthem, bit of the Dukes of Windsor sound in the vocals department (nothing wrong with that snarl), this is super fun and super catchy. Radness.

Their spine is their bassline! And this one is a T-Rex of a song.

Their spine is their bassline! And this one is a T-Rex of a song.