Few bands get the kind of dream run that Born Lion had from their formation and the release of their debut album Final Words. There was the multi-record deal with Four/Four, three singles scoring rotation on Triple J ("D for Danger", "Good Times Jimmy", "Good Dogs Play Dead"), a litany of hard rock dream support slots (The Hives, The Bronx, Royal Blood, Mamozets, Karnivool) and an ARIA nomination for Best Hard Rock/Heavy Metal Album as the cherry on top in 2015.

It was a simple plan, well executed -  work ridiculously hard and things, hopefully, will work out. Their searing blend of razor-sharp punk’n’roll and monsterous pop hooks connected with a wide audience. From the fevered frontrow-mosh-warrior to the polite steering-wheel-tapper, Final Words was a powerful magnet for lovers of an infectious dual guitar attack and fuzzed-up riffs that seemed like they’d happily throw on a pair of gloves and size-up Godzilla.

But every new band gives the first one their all, right? With a tighter turn around, the wear and tear of the road and the increased wattage of the spotlight, bands often live or die on the fruits of album #2.

Born Lion know this tale all too well and while fellow Sydney-siders sat out the winter of 2016 by the heater with a nice Milo and a side of Netflix, the foursome locked themselves away in a tiny, frosty rehearsal space in southern Sydney for what ended up being a six-month musical journey. Here they broke in ferocious new drummer Andres Hyde (Sumeru, No Apologies) and whittled down their song library to the core 11 tracks that would eventually make up their next offering, Celebrate The Lie.

From there, they set sail for Adelaide to filter the material through the mind of producer Jimmy Balderstone, the man behind the beloved work of punk’n’hardcore staples Luca Brasi, High Tension and Grenadiers. Working around the clock for two-weeks straight, the team crafted a high-energy, zero-bullshit album that skyrockets the dynamic range of the band, focussing on lean songwriting coupled with wild sonic experimentation.

“We really tried to forget any kind of label that had been put on us,” confirms frontman John Bowker. “We just wanted to make something we enjoyed without being concerned as to what musical category that placed us in.”

To give the album the maximum punch possible, mixing duties were entrusted to Ryan Hazell (The Drones, Green Buzzard, The Fumes) in Sydney, who made sure the songs retained the crispness of Born Lion’s live show as well as the fine details of all the pedals, snares and amps they’d so lovingly attacked back in Adelaide.

The result is a diverse exploration of how far you can take the distorted guitars and melodic howl experience, fearless stepping over commonly-held boundaries to take in everything from Converge-esque off-time destruction to the full-tilt groove’n’croon of acts like Queens Of The Stone Age.

From the crushing final stabs of opener “Slowly Sinking”, through the maniacal bop of first single “Evil K” and the slinky bounce of tracks like “Patience For”, Celebrate The Lie sees the ‘Lion realise their full potential as one of Oz rock’s ear-rattling best.

As they prepare to “celebrate” the album release in true Born Lion fashion (hitting the road, hard), it’s safe to say they’re a band that can be counted on to enter the ring for round three.

Born Lion are a hard-rocking fun-loving Sydney 4-piece on a mission to create some righteous punk rock. They're one of the winners of our Soundwave competition and will be opening the festival at Sydney's Olympic Park, 11am this Sunday 24th February. Right on!

If you like John Mayer, you will probably hate us. As far as developing our sound… Well, it's a rich tapestry.... We just jam and play off each other. We're always swapping CDs that we stoke on and that probably influences our sound alot. Right at the beginning: Fugazi, Refused, Hot Snakes and The Bronx were getting passed around. But other than that it just the usual stuff. Bashing out ideas and then deciding which ones are kept and which ones are canned. Basically, if it doesn't make is want to break stuff, it's canned. Yeah, there’s not too much manuscript paper and pencils in this band. (DAVE)

High energy! We sweat and bleed and want people to feel a sense of danger. We basically put every fibre of our beings into shows, regardless of where it is. (JOHN)

Can’t remember who said it. Maybe it just occurred to me... like some type of epiphany... "do it because you love it". I know it's a cliché, but it's the only way you'll ever be able to get through the not so fun parts. Also my dad once told me to play Slim Dusty covers exclusively if I wanted him to come to any shows. And Billy Joe Armstrong once told me (i.e. I read in a magazine) "play football, no one gives a shit about people in bands" (NATHAN)

There are so many! I think one that stands out is seeing Shihad in small coastal Sussex Inlet, at the local RSL. A few buds and I thought it’d be cool to see Shihad in a different kind of location like that. They played to about 100 people and just tore the place down. Climbing speaker boxes and just sounding massive. It was the best! (JOHN)

We are releasing our debut EP on March 1st! Then we are touring the east-coast through March. After that we're going to take things as they come and focus on writing again for a few months. There will defiantly be a-lot more shows this year but we seriously want to make a full-length album, so making time for writing is going to be a priority. (JOHN)

...world class! Particularly in-terms of the breadth of talent at the grass roots level. I have done a fair bit of traveling over the last few years and been to a lot of pubs and bars. What's going on here is really exciting. There's so much talent, and it's everywhere. Maybe because it's so hard for new bands to get a start here, the standard in Australia is so high. Whatever it is, the quality of live music in Australia is right up there and I reckon it's only going to get better. (RED) 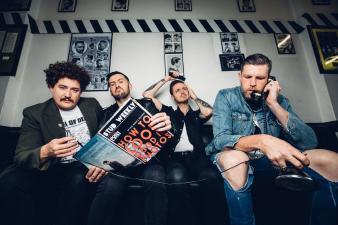 Hard to fault. Both tracks by these guys are killer.

Hard to fault. Both tracks by these guys are killer.

This is the best. There's a touch of The Hives to it but it kicks a lot harder.

This is the best. There's a touch of The Hives to it but it kicks a lot harder.

I'm pretty sure listening to this just gave me a neurological disorder. But one of the fun ones, so high five dudes!

I'm pretty sure listening to this just gave me a neurological disorder. But one of the fun ones, so high five dudes!