Having recently signed to Brisbane’s alternative label Bedlam Records and off the back off the success of his last single ‘Grime Joint Part 1’ – Brisbane based artist and Zimbabwean transplant, Carmouflage Rose brings us the weekend anthem we didn’t know we needed.

The infectious track, produced by Brisbane’s answer to Metro Boomin’ - James
Angus, is filled with a tropical atmosphere and the signature dance-hall/reggae
aesthetic that Carmouflage Rose so eloquently brings with his unique vocals.

“Late Nights is the anthem for the house parties we all know and love, the beat that gets ya girl movin’ on the dance floor” states Carmouflage Rose.

With a surge of hip hop artists helping diversify the genre in Australia, Carmouflage does his duty to bring the unique sound of his motherland into the gambit of what is on offer. A welcome injection of culture that will see him permeate his way into the international scene in time.

Bringing you your weekend party anthem is Brisbane rapper, Carmouflage Rose. He's taking Australia's Hip Hop scene into his own hands with his new track 'Late Nights', a fierce fusion of funked-up production and slick vocals.

I develop my sound through long hours and dedication to the studio and creating a sound with James Angus. I went through all the stages of becoming an artist, from a rapper's rapper, to a flex rapper and to an emotional rapper and now I've reached the stage where I know I can rap and I'm creating a vibe. To be honest, I just stopped trying so hard.

Pain, love, and emotions. I'm also inspired by good times with people I love and the fact I can do this and not be paid a cent and still be happy doing it.

What can punters expect from a Carmouflage Rose live show?

Hype! It's totally a hype thing. We always have a high energy type vibe and we gradually move into the more heartfelt songs while we cool down. You've got to be ready to express!

The best advice I was given was from my brother Wayne. I used to send him my music all the time and he never liked it, until one day he called me and asked me how I was making music that sounded American because I lived in Australia and was born in Zimbabwe. It didn't make sense to him. So he told me I should go back to my roots and mix it with Australian culture and that's how we made my track, 'Late Nights'.

'Late Nights'. Haha. Or UV boi and his track 'Feel Love' for sure and would have to make a cocktail of tracks that includes tracks by Peking Duk, Spenda C, Joyride, Tkay Maidza and of course, Allday.

When it comes to Australian music, I usually listen to my inner circle like Brisbane rapper I AM D and his tracks 'Acceptance Speech' and 'Lessons'. I feel like he really touches some heartfelt emotions I can relate to. So does Gallus with 'Lionheart'. But if I had to choose an international song it would be Whitney Houston with 'I Have Nothing', Luther Vandross with 'Dance With My Father' or James Blunt with 'Goodbye My Lover.

I'm gonna be hella bias here and say 'Late Nights' because it really gets the vibe naughty haha. But if it's not 'Late Nights' it has to be Flumes remix of 'HyperParadise' by Hermitude.

I saw Kilter and Feki at the Triffid. It was pretty amazing. I love the way they do live shows. The Sonics were also colourful.

Tell us about the bands or people in the Brisbane music community that inspire you?

Midas.Gold for sure. His passion, drive and how he approaches things wholeheartedly amazes me. Gill Bates as well. He was the first to do it like nationally. He's such a creative person when it comes to anything videos, music, drawing and art. He has ideas that can change the world for sure. James Angus also inspires me because he's the guy that brought my voice to your device. His ear for music is amazing and unmatched. His drive and how fast he produces his music is crazy. He's beyond skilled and the pioneer with in the entire Brisbane music community. He's also behind every instrumental coming out of this city right now.

I've got heaps of shows coming up, so my plan is to meet a lot of new people at the shows and connect with everyone nationally. There is always more music coming. I've been waiting for this moment my whole life and I'm not slowing down anytime soon. I've also got an EP in the works so look out for that! 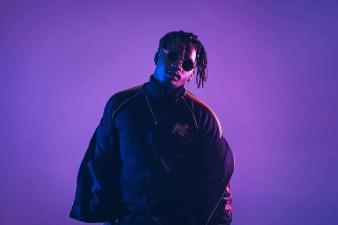 It's 4:30am and I am BLASTING this in the jjj studios right now. A vibe nobody wanna fck with!

It's 4:30am and I am BLASTING this in the jjj studios right now. A vibe nobody wanna fck with!

This. Is. HOT. A Mike Will Made It style beat, some sensual swagger, THIS is the dancefloor I want to be on all night.

This. Is. HOT. A Mike Will Made It style beat, some sensual swagger, THIS is the dancefloor I want to be on all night.