Headed to Download festival this weekend? Well, you better acquaint yourselves with Melbourne heavy heads Cast Down. They'll be opening the main stage this weekend as our Unearthed comp winners!

To sum things up as quickly as possible, we’ve been a band for not even two years and had two guitarists and two drummers leave the band in that short amount of time. We started off basically writing songs that were designed for people to mosh to and personally I was pretty tired of writing and playing songs like that. When our guitarist Pat wrote our latest single ‘Leatherman’ he also sent through an industrial version with electronic drums/synths/etc and we all thought it was great and that was the direction we should lean towards. It felt like a natural evolution for the band and an opportunity to leave all the things that were dragging us down behind and push forward with a new vision.

Tricky question but I’ll try and split it into two answers. I find it pretty easy to get bummed out about being in a band, sometimes I’ll play a set where I end up being really disappointed in myself because I wasn’t performing at the level I want to be and it can be super frustrating, but then I’ll watch videos of the set and see all of our friends and people at our shows losing their minds and having fun and it really levels me out. In such a short time I’ve gotten to make so many new friends, meet so many cool people and travel Australia with my best friends which is undoubtedly the best thing about making music.

Musically I’m constantly inspired by all of my favourite bands, lyrically I’m super inspired by Daryl Palumbo from Glassjaw and Keith Buckley from Every Time I Die. I spent a lot of time as a teenager listening to those bands, reading their lyrics and wishing that I could be them and now I’m able to have the opportunity to hone my craft and write and perform lyrics that I’m really proud of, albeit on a much smaller level.

What can punters expect from a Cast Down show?

I think we bring a lot of energy to the table. I’m not interested in being a perfectionist band because the live music world is so different to the studio, I’ve always wanted people to think of us as a band with constant activity where nobody stands still and we’re consistently engaging with the audience. I feel pretty confident in saying you can expect to see mic grabs, spin kicks, headbanging and people throwing fists.

Not sure it directly counts as advice as it wasn’t directed at me but there’s a book called ‘Lynch On Lynch’, which is a book full of interviews with the director David Lynch. I can’t remember the exact quote but there’s a big section about how when he was making art he would only visualise himself in the role with the idea that it makes it a complete extension of himself. When I previously mentioned some of my favourite vocalists and the fact that I spent a lot of time wishing I was them, I found myself writing lyrics and performing live and wondering “would they be happy with these lyrics?”, “would they perform like this?” and that whole idea that Lynch was talking about really helped me disassociate my art with somebody else and make it an extension of me instead, harnessing my flaws and my talents.

The Veronicas with 'Untouched'. I legitimately struggle to think of a single scenario that isn’t made better by that song.

Slim Dusty with 'A Pub With No Beer'. Obvious reasons.

Hilltop Hoods with 'The Nosebleed Section'. Instant boogie maker the second it comes on.

The last one that I didn’t play would’ve been Invasion Fest 2017. That was a mad time and it is every year because so many bands and people from the heavy music scene across Australia all come to Melbourne for the weekend to watch a bunch of sick bands. Our friends in Honest Crooks put on one of the toughest sets I’ve ever seen and I got to see one of my favourite international bands The Acacia Strain for the first time in a few years too.

King Parrot and Pagan are at the top of my list for Melbourne bands that inspire me for sure. I don’t know any of King Parrot personally but from an outsider's perspective, it seems like they’re just making the music they want to hear and having loads of fun doing it. It’s so cool to see how well they do overseas and it’s very inspiring. I also absolutely sweat the band Pagan from Melbourne who are super unique and just the coolest band ever. Every time I’ve seen them live they look like they’re having the best time and I’m so excited for their new music.

We’re playing Download Fest this Saturday then we’re on tour with Honest Crooks, Apate and Underminer throughout April. Our debut EP and much more touring will follow suit. 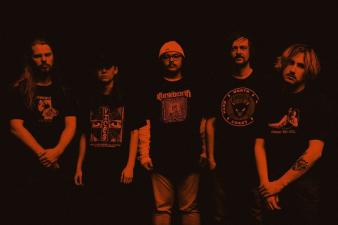 Shout outs to Cast Down!

They're playing Download Fest as our Unearthed winners!
More