The Wombats, LCD Soundsystem, Passion Pit, The Strokes, The Rapture

Chase City are releasing new single 'Liberty' in April. The band has been self producing tracks over the last couple of years but thought it would be beneficial to work with someone who could bring something new to their sound.

New single 'Liberty' was produced, mixed and mastered by Malcom Besley (Northeast Party House, City Calm Down) and is the most complete track the band has done to date. Chanelling 90s UK Garage, DnB & Rave, the song has a throbbing energy with soaring vocals and melodies.

Chase City originally started as a different project with a similar line-up. After becoming Chase City we did a run of shows around Hobart before settling in to record our debut EP. We spent a lot of time in the studio where we laid down our tracks and have slowly started to find the sound we want to pursue. You’re one of the winners of our Falls Festival competition. What can Falls punters in Marion Bay expect from the Chase City live show?

You’re one of the winners of our Falls Festival competition. What can Falls punters in Marion Bay expect from the Chase City live show?

We try to make our live show as lively and energetic as possible. We don't like taking ourselves too seriously and love performing live, our singer (Tarik) may thrown in a sneaky backflip during the set...is that even allowed?

Being Tasmania's premier music festival, all of us have attended Falls yearly and are looking forward to experiencing a world class festival from a different perspective! And obviously looking forward to some great music and seeing some of our favourite acts perform live.

Over the next 2 weeks we are doing a bunch of shows at home in Tassie and then heading off to the mainland to do some shows along the east coast of the country! After that we will be looking to tee-up with a producer and lay down some more tracks and look to evolve our sound and see where things go!

If you had to make one new year's resolution, what would it be?

I'm really bad with new year's resolutions but maybe eat less KFC? I think we all indulge in too much fast food especially while we are away!

What you make it. I think it's easy for people to overlook local Australian acts but I think there is a bit of everything going on here and it takes only an hour of trawling through SoundCloud or Unearthed to find some incredible music. I really love the Australian music culture at the moment and as an independent aspiring band, I could not think of any other place to be playing our music! 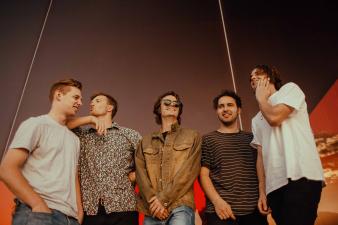 Congratulations to our 2013 Falls Festival winners!

hook this to my veins

hook this to my veins

Drawn in by the influences and the landscape did not disappoint.

Drawn in by the influences and the landscape did not disappoint.

You guys got a huge sound going on in this track. The epic drums and anthemic feels with the vocal make this a great combo!

You guys got a huge sound going on in this track. The epic drums and anthemic feels with the vocal make this a great combo!