At the age of only twenty two, Melbourne’s Chitra squeezes the juice out of folk, indie-rock and pop and turns it into a zesty new taste of woozy intimacy in her debut Self Titled EP. Singer-songwriter Chitra Ridwan shines, mastering her unique sound that refuses to conform to one specific genre - gleaning elements from across a musical canvas while her timeless voice anchors her songs firmly in the present.

Chitra’s songs capture the candid and lived in space of in-betweenness of an old soul growing up and navigating the present with an observant and cuttingly self aware lens. Each song offers a vulnerable new insight, individually and collectively weaving a complex narrative. Her love of 50s & 60s girl groups like The Supremes and The Shirelles shines through on the production and vocal performance as well as influences from modern day heroes such as Molly Burch, Angel Olsen and Adrianne Lenker of Big Thief.

Growing up surrounded by the diverse musical influences on the Bellarine Peninsula, Chitra’s sound is unrefined by formal training and blossoms with the self assuredness and freedom of a coastal kid.

Chitra’s debut Self Titled EP was recorded with new collaborators Dylan Young (Way Dynamic, Emma Russack, Snowy Band) on guitar & piano, Lehman B Smith (Totally Mild, Grand Salvo) on bass and Maria Moles (Jaala, Mild Life, Doroth) on drums. With the band and production team emerging from different backgrounds, each bringing their own musical language to the table. Chitra braved the highly vulnerable process to capture each specific feeling in its entirety through collaboration, trial and error and embarking on unexpected avenues of discovery for a formerly solo artist.

The EP was recorded over a week in enchanting Mount Macedon with producer James Cecil, founding member of beloved Australian band Architecture In Helsinki who has previously worked with The Goon Sax, Elizabeth, The Orbweavers, Time For Dreams & many others.

Covering deeply complex narratives of unspoken thoughts, self preservation and figuring-it-all-out, Chitra catches the listener off guard. Though things sound breezy, the deeper observations on the EP are astute and rich proving that the more specific you make something the more universal it becomes.

Chitra opens the EP with her third single “Leaving”, bringing a cheeky side eye to a relationship that time and time again proves its imbalance. Following up with “Tired Lies” a lush ballad exploring the complexity of longing and loss showcasing the soaring translucence of her voice at its most potent. Her most recent single “Keep Up” is a pop meets bluegrass bop seeing Chitra boot-scooting around traditional country stylings with soul and sass to stand thoughtfully empowered.

Chitra’s effortlessly cool energy and endearing magnetism emerges from her definiteness to remain wholly herself in her writing and music, making work that is deeply grounded in the honesty of her day to day. She represents a strong and free thinking creative emerging within Australian culture that strives for creative authenticity rather than conventional milestones of the past. 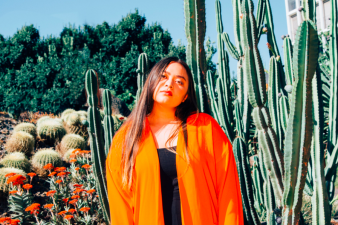 Droppin' in somewhere near you
More

bit of extra swagger on this one from chitra and i'm all about it.

bit of extra swagger on this one from chitra and i'm all about it.

There's a real allure and cheek in this one! Love the curveball in tempo towards the end.

There's a real allure and cheek in this one! Love the curveball in tempo towards the end.

That gorgeous and classic Chitra tone and charm is so enriching!

That gorgeous and classic Chitra tone and charm is so enriching!