DevilDriver, Lamb Of God, In Flames

Chronolyth is an Australian groove/melodic death metal band from Brisbane, Queensland, formed in November 2012 by Hamish McSorley (vocals) and Alex Nisiriou (guitars). Known for their energetic live show, circle pits and strong connection with their fans, a new breed of modern metal is born.

Chronolyth's melodic diversity and carnage displays prominently on their debut album, Sovereign (self-released - 2013). With 2 Australian headlining tours under their belt (Bitter Reflection Tour 2013, Sovereignty Australian Tour 2014), the band has taken to the road for extended periods of time. Launching them into worldwide recognition, the band would share the stage with renown acts such as Alice In Chains, DevilDriver, Gojira, Green Day, Avenged Sevenfold, Trivium, A Day To Remember, Suicide Silence, Testament, Gloryhammer, Adept and appear at Australia's largest alternative music showcase Soundwave Festival in 2014.

Recognised for their devoted fan base, the band was officially voted as #1 most requested band to support heavyweights Cradle of Filth in 2013. Fans would recognise Chronolyth for their tight and energetic live shows, fuelled by engagingly heavy yet melodic music.

In an over-crowded scene where saturation is deafening, they are a band in demand of full attention and refuse to be ignored. With an honest approach and a message to deliver, Chronolyth are a force to be reckoned with. 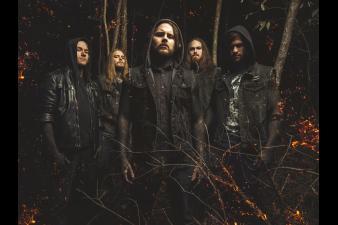 March of the Forsaken

I'm about to open up the pit (of despair).

I'm about to open up the pit (of despair).

The Heresy (Crucify Your God)

The Heresy (Crucify Your God)