DeathStarrs is an impressive name for an impressive group – Clinging to the heels of their first single Immortal (Co-Produced by Suffa of the Hilltop Hoods), DeathStarrs are back to prove they’re more than single trick ponies with Apologies in Advance, their first new song in two years.

But who ARE DeathStarrs? To be blunt, the fat one that looks like Turtle from Entourage is called Syntax, and short one with the beard like a biblical prophet is Mules; but although the pair may seem like an odd grouping, just like a trailer for a Nicolas Cage movie, looks can be deceiving. In 2012 the pair won the Triple J Hilltop Hoods Remix competition – their song Novocaine beat more than 600 entries, and gave the duo a chance to work with revered Hilltop Hoods producer Suffa MC.

Three years later DeathStarrs are back, and they're bringing with them a brand new sound, and a brand new direction.

Death Starrs are Syntax and Mules, the Gold Coast/Melbourne duo who are the winners of our Hilltop Hoods remix competition. They’re also our Feature stars all this week on triple j Unearthed and digital radio.

Death Starrs is Syntax (rapper) and Mules (producer/rapper). How did the two of you start working together?

Our eyes met across the room at a crowded Kebab shop. Actually we went to school together, but we never really knew each other until years later when we were introduced by a mutual friend. We both love the same artists, my voice (Syntax) and his beats (Mules) just mesh together so well, and we both have an insatiable thirst for 80’s movies and celluloid violence. As a result, I don’t feed my pets after midnight or get them wet, just to be sure.

It’s been such a long progression. I remember when we first started out we imitated the artists we really liked; Mules loved the Ruff Ryder’s DMX-esque sound, but I was into the West Coast Death Row Records movement. As a result our first foray into music was, interesting, to say the least. But to be honest, after a while we just got comfortable with who we are, something I think is important in the music making process. When you don’t have to wear a mask and pretend to be someone else your music is far more believable and has far more impact.

You’re the winners of our HILLTOP HOODS REMIX COMPETITION. What was the remix process like for you guys?

To be honest I started writing to a different beat entirely. We were late-comers to the competition, we heard what everyone else was dishing up and thought, “Oh hell no”. When Mules heard what I was working on he flipped the sample and made it a double time beat to match the track I was writing. To quote the greatest thinker of our age, Ace Ventura….“Like a glooooooove”. Mules was the real winner here though. He took that beat to places it never thought it would go.

Who are some lesser known producers and MCs in the Australian hip hop scene that people should be checking out?

Maundz is one of our collective favourite Australian rap dudes. The Born Fresh crew from Brisbane, Tommy Ill, Mr Hill, Seven, DJ Butcher, Prophet Rayza, plus my other musical group In Good Company. Personally my favourite artist right now is Ta-Ku, someone needs to make this dude famous.

We’re working on a full length LP as we speak. Well, not literally as we speak, because that would be weird. Death Starrs also has some fingers in other pies, album placements etc, plus we pump out a pretty awesome live show so we’re about to see a lot of sleepless nights and hoarse throats soon enough. Good bless 3am drive through fast food.

About a 9.4 on the excitability scale at the moment. Somewhere beyond Rambo: First Blood, but just a little back from Rambo 3. 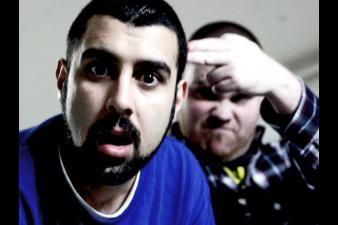 The Queensland duo, made up of emcee Syntax and producer Mules, took the stems from The Hilltop Hoods track ‘Now You’re Gone’ and completely made it their own.
More

As ever Syntax has plenty on his mind! Good to hear from these blokes again.

As ever Syntax has plenty on his mind! Good to hear from these blokes again.

The boys are at it again! Good to hear. Strong beat, strong lyrics... Thumbs up.

The boys are at it again! Good to hear. Strong beat, strong lyrics... Thumbs up.