October 2013, New York City. The streets are abuzz with anticipation for the next Banksy piece. The prolific artist has taken residency amongst the city, each day or two there is news of a fresh site that has been occupied and yet, he still eludes public viewing. People scurry about with cameras in the hope of uncovering some new and unique Banksy gold. It's ubiquitous.

Meanwhile, at Pianos Bar on Ludlow Street, murmurs circulate that Julian Casablancas is just hanging out and watching some unknown bands play to a handful of people. The hustle of the city gets hustled. Only in New York.

The Delta Riggs were fortunate enough to have been indirectly involved in all of this during their weeklong tenure playing at CMJ 2013 and absorbed the energy. NY really is the mecca of the arts industries, a virtual world stage for each unassuming individual inhabitant, is electric at all hours.

Drawing from this & other experiences abroad, The Delta Riggs channeled a different beast for their second album. Still full of swagger and fuelled with Elliott Hammond's whiskey soaked vocals, with an undercurrent of experimentation, urban groove and vocal melodies clearly definable in each track. Dipz Zebazios is a huge progression dynamically and musically from the band’s Australian Music Prize nominated debut Hex.Lover.Killer and highlights the ambitions of a group unwilling to sit at idle.

A sprinkle of influence can be heard from touring alongside fellow genre-benders Primal Scream & Divine Fits but it’s the production and rhythmic values of The Roots, Jurassic Five and Outkast that really stand out.

Whilst the new sounds and approaches show depth and a willingness to push their songwriting to new places, they’ve maintained the core elements, which makes them such a special live force. In-line with their ethos of capturing a true moment, DZ was tracked live over just 3 Days in December, once again self-produced by the band.

Hammond admits “It’s a definite sonic shift”, he adds “it’s also something that we wanted to do to challenge ourselves and in turn, those who might not expect this from us”.

Dipz Zebazios is another bold step on this young, yet mature band’s career, showcasing what they are capable of and what we are still yet to see. "It's meant to be fun" he quips with a wry smile, as the band disappears onstage to tear the roof of another unsuspecting venue...

Melbourne 4-piece THE DELTA RIGGS are the winners of our PYRAMID ROCK competition and will be heading to Phillip Island, Victoria to join the already amazing line up. Their swampy bluesy rock'n'roll will be blowing the tarp off the Pharoah's Annex stage at 1:05pm on Friday 30 December.

Seven years of blood, sweat and tears and perpetuating the band throughout that time makes us what we are today. We love rock n roll, we love the blues, we love punk rock, we love angst, we simply love music.

You’re the winners of our PYRAMID ROCK competition. What can Pyramid revelers expect from the Delta Riggs live show?

Energy, sweat, sweet harmonies, great shirts, lots of hair, sex, girls, organ and musicianship. Roll that all into a Snowball and you have a Delta Riggs live show. We are ecstatic to be playing Pyramid this year, i personally have never been to that particular festival but have heard a lot of great things. We are just very thankful and humbled to have been chosen to partake in the festivities, so thank you triple j & Unearthed!

What are you most looking forward to about PYRAMID ROCK? Who are you psyched to see?

I'm definitely most looking forward to our set, we have been playing a lot of small club shows lately so the chance to play to a festival of people in an outdoor setting really appeals to us. Its unusual, its different and its exciting. As to who I am looking forward to see play - I'm really interested in seeing Dum Dum Girls, I really dug their latest album and who doesn't like to see hot girls playing music?

"Make sure you wear a thingy" - My mother referring to me wearing a condom.. Musically though the best advice I ever got was from my pal Darren Cordeux (Kisschasy). He once told me that it doesn't matter how good you are at your instrument, or how good you look on stage, if you don't have the songs its going to be a tough ride. At the end of the day a great song is always going to be a great song. That, to me, means so much.

Hopefully we will be continuing the run that we have had late this year and keep playing great shows, writing great songs and hopefully record our first album. There have been talks of potentially heading overseas at some stage too, but nothing is confirmed or set in stone. It feels like its going to be a great year though.

...back! We are in a time where a lot of Australian artists are being recognised in other markets around the world. This is a fantastic thing for us all, as it feels like we are getting looked upon as a talent pool again and helps a lot of bands when making the venture to the UK or the US. 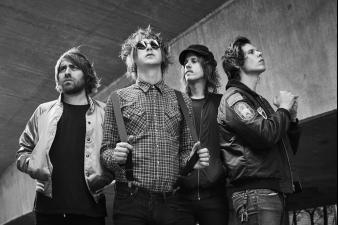 Congratulations to The Delta Riggs!

In a foot-stomping frenzy of hair, stick-it-to-the-man attitude and swampy blues, The Delta Riggs feel what you feel, with frustration and aggression, or joy and celebration.
More
More Reviews
Download the triple j Unearthed app: