The Strange Boys The Velvet Underground My Morning Jacket

The Strange Boys, The Velvet Underground, My Morning Jacket

New Single "She Shot It" OUT NOW. Written as a band, produced as a band, recorded live and mixed and mastered to tape, Dirt Farmer like to do things the natural way. This approach has made 'She Shot It' a swinging, shaking, lovelorn and beautifully messy rock and roll song where lead singer S. Barlow preaches “She was at the dance on Saturday night, Dancing up a storm with another guy” and features band members and friends yelling over the track on behalf of their singers disillusion.

"It’s a display of Dirt Farmer at their best, proving they’re masters of beautifully messy rock and roll." - Tone Deaf

Dirt Farmer are this week's Feature Artist. Check out their hazy 60s inspired pop all this week on triple j Unearthed and Unearthed Radio.

Dirt farmer started off as a garage project, we’d get together on Friday nights with a six-pack of beer each and play loud, 60’s Rock & Roll jam songs…usually until we got shut down by the neighbours. Our music has definitely progressed since then as we’ve tried to focus more on writing great guitar & vocal melodies and generally making 3 guitar parts, bass and drums together sound decent…we’ve also learnt more than three chords. I think the main thing that has developed our sound is our change in taste of music, we like pop, rock & roll, blues, psych, some hip-hop…pretty much everything.

We’ve had the honor of supporting a lot of great Australian bands lately, Husky, Alpine and The Paper Kites to name a few. This generally means that we start off with a small crowd… but it’s a great feeling when the early comers who initially don’t expect much start dancing along and get involved in our music. The best response we’ve had was probably when we supported The Paper Kites, at the East Brunswick Club. We were first on but managed to get everyone up from sitting around talking, to dancing like mad at the end of the set. Overall though, our set is fairly progressive, as in we like to start with kind of humble songs to warm everyone up and then finish with a bang…‘New Mexico’ (the party song).

Tell us about the music and people in the Melbourne music community that inspire you?

‘The Messengers’ are kind of our brother band, we’ve really looked after each other when it comes to supports and gigs in general. Both of our bands are from Albury Wodonga so I think that country connection helps a lot. We have been sitting on our EP for so long now! Most of the songs on the EP are done by Colin Leadbetter who is by far one of the nicest and most involved producers we have had the honor of working with. He knew exactly what we wanted and took time to help us out. Tim West has been a massive help to Dirt Farmer; he’s also a great friend from Albury, who just happens to be a wizard behind the mixing desk (the west wizard). Also, Steve Schram was heavily involved with our new track ‘Kick It’. Chris was the only one of us dealing with him, so the rest of us had to hold our breath. But when we got the track from him, we realized why his name is so well regarded. We’ve also had the honor of being friends with one of Australia’s greats Lisa Mitchell, she’s a great source of advice when it comes to the music industry and we respect her so much as a songwriter.

This advice was not given to us specifically, but to the general community of musicians. “it's much better to roll your t-shirts rather than fold them when on tour. Stops creases.” Dan Kelly.

On the 20th of April, at Yah Yah’s in Collingwood is our self-titled E.P. launch “Dirt Farmer”. We have been working up to this for a while now and have a great bunch of bands coming down to support us including ‘Them Swoops’, ‘Dan Davey’ (from Sister Jane) and ‘The Messengers’. We’ve been toying with the idea of turning Yah Yah’s in to a Beach, but it might be hard to convince them to let us bring in 4 tonnes of sand. After the EP launch we’re going to play as many gigs as possible and go straight back into the studio to record some more songs. Hopefully get some tours lined up also.

Super competitive, which means bands like us appreciate every chance we get for our music to be heard. It feels like trying to get blood from a stone sometimes, but it’s easily worth it. Don’t forget that you’re getting paid to play guitar even if you are in the lowest tax bracket. 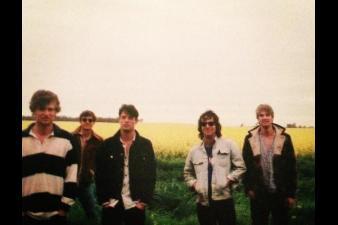 Congratulations to our 2012 NIDA winners!

Alibi for the Silent Guy

That saxophone bellows like a horn of the gods. Well played.

That saxophone bellows like a horn of the gods. Well played.

I've been known to be no stranger to hyperbole but I'm just going to go and say it; this is song is perfect. Every instrument sounds bouncy and warm in the mix and the hooks just keep rolling out with gold-hued loveliness.

I've been known to be no stranger to hyperbole but I'm just going to go and say it; this is song is perfect. Every instrument sounds bouncy and warm in the mix and the hooks just keep rolling out with gold-hued loveliness.