Trash Talk, Eminem, Killswitch Engage, System of a Down

DREGG make powerfully energetic music, driven by themes of fierce individualism, with a sound that hungrily consumes metal, hardcore, and rap, only to heave it back up in a colourful rainbow of bombastic brutality and iconoclastic absurdity, lovingly fed to the audience like mother birds. The Melbourne, Australia fivesome is thrillingly provocative, occasionally disturbing, and filled with hip-hop swagger. The medium is the message, in their music, their tongue-in-cheek videos, and the exaggerated manifestations of each member’s “id” presented via elaborate theatrical costumes.

Imagine Eminem, fronting Mr. Bungle, while sipping absinthe, after an Oscar Wilde binge. Or Hatebreed, covering the Wu-Tang Clan, inside an art installation, curated by Andy Warhol’s ghost. DREGG take the piss out of all of the bullshit, like an episode of South Park set to metalcore.

While there are clearly creative cues taken from hyper-charged outfits like System Of A Down and Rage Against The Machine, DREGG skew neither far left nor far right on the political spectrum. Instead, they occupy a firm place outside of the argument, one of satire and critique.

Painted faces, crazy masks, discordant visuals; no matter how weird, DREGG offers much more than shock value. This is music and art intended to provoke and inspire. If there’s one major takeaway intended for the audience, it’s to unleash the weirdo within. DREGG aim to push the boundaries of self-expression, open up conversations, and the move the crowd while they do it.

“I’ll be a DREGG till I’m dead,” the band declares. Will you?

Get to know our UNIFY comp winners, DREGG.

I guess we just jammed out and talked about what we wanted to create and came to a conclusion after trialling a bunch of different styles!

The power of creativity. Knowing every time we sit down to write, that it's possible for us to create something completely new.

What can punters expect from a DREGG live show?

Something you've never seen before. It's funny, it's serious, it's dark, it's light-hearted. It's a bit of everything. We're there to entertain mentally, musically and visually.

I'm a barber and when I was an apprentice at Culture Kings I was lucky enough to give the Aussie rapper 360 a haircut. I'll never forget him telling me how things didn't start happening for him until he learned to enjoy every success, whether it be small or huge.

What Australian track would you play someone to make them cry?

Invasion Fest, it was awesome! A whole bunch of homies were playing and it just had the best vibe.

I'd say it's the scene as a whole. I only moved to Melbourne 3 years ago and one thing I've really noticed here is how all the different music scenes get along. It's dope!

Hopefully a bunch of tours! We haven't toured off our new release yet so it would be awesome to get out there and take these songs on the road. Would love to get another song or 2 out as well! 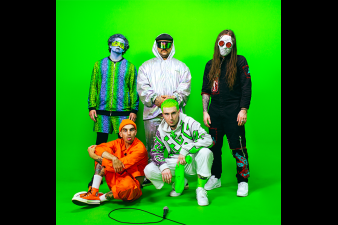 The UNIFY lineup just got even better!

Ready to infuriate my neighbours with this one at an obscene volume.

Ready to infuriate my neighbours with this one at an obscene volume.

Heard this one of Unearthed radio on Friday and spent that first 20 seconds absolutely baffled. Once it hits though... it really hits. There's good reason these dudes have caught the ears of some serious big wigs round the world.

Heard this one of Unearthed radio on Friday and spent that first 20 seconds absolutely baffled. Once it hits though... it really hits. There's good reason these dudes have caught the ears of some serious big wigs round the world.

Fkn oath this is good. You really had me there at the start though. Some wise spill in such a mad rush of passion. Love it.

Fkn oath this is good. You really had me there at the start though. Some wise spill in such a mad rush of passion. Love it.