Eagle and the Worm are an 8 piece touring and recording band form Melbourne Australia -Eagle have become one of Australia's most loved live acts- taking their 8 piece band to some of the countries best festivals and clubs; Big Day Out, Meredith, Bluesfest, Falls Festival, as well as performing at internationally acclaimed UK/EU festivals- End of the Road, Electric Picnic and their own international headline club shows. Eagle and the Worm Critics cited their 2011 debut album "Goodtimes" as 'Without a doubt a flawless debut- AU Review" and "An eight-piece mega musical machine- Drum Media", "4.5 Stars- Herald Sun, Courier Mail" After spending the later part of 2011 writing and collaborating with the likes of Hypnotic Brass Ensemble (Chicago), Big Freedia (New Orleans), and Milwaukee MC Juiceboxxx - Eagle spent the Aus summer of 2012 recording a new EP/Ten inch "Strangelove", set for release in October 2012 on Warners Australia. available on digital and CD release at www.eagleandtheworm.com www.facebook.com/eagleandtheworm

Summer and thongs. Sausage and tongs. And sweet times gone wrong- all make for good verses and good songs. Meet Jarrad from 9 piece Eagle and the Worm.

I spent a couple of years demoing songs in my bedroom- I didnt really have the intention of releasing anything. I started thinking about concepts for an album in 2008- and collected heaps music i liked- I bought a stack of music in 2008. I took ideas from the music of my favorite acts, and started stylizing my demos more- recreating grooves and ripping off chord progressions i liked. I started re-doming on my 4 track, then re-re- doming again on my computer- throwing songs around untill i knew what was going to work and what wasn't. I sat on the songs for a few months and had a chat to engineer Steve Schram about booking a session to do a record- thats how EatW came about.

We break it down to a 5 piece- But if we are doing our own show, we gig as a 9 piece. With brass, hammond, synth, the works. Its a loud show. At the moment we are jamming the arrangements that are on the record. Playing the things we have recorded.

What are the plusses and minuses of a nine piece band?

It can be a drag trying to get weekly full band rehearsals- be the pay load is worth it.

We are going to sticking around Melbourne for a couple of months, playing shows with friends bands. Planning to release another 7 inch in June before the Album later in the Year.

I can go out any night of the week- and see some of the best music in the world for the price of a pizza slice. We have a lot of little labels to support us with releasing all the different music out there. Australian Music is great- Amazing actually. 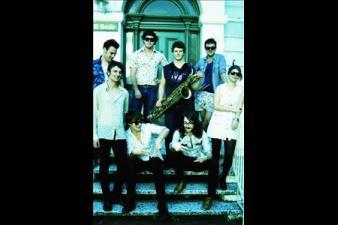 If the Benny Hill show was still around, this would make a great theme tune for it. That's a compliment too.

If the Benny Hill show was still around, this would make a great theme tune for it. That's a compliment too.

Hey! All eight of Eagle & The Worm's members are giving it their full bluster. Moral of the story? Every band should have a horn section.

Hey! All eight of Eagle & The Worm's members are giving it their full bluster. Moral of the story? Every band should have a horn section.