Over time, creativity blossoms. Encouraged by experience and doused in inspiration, art reaches its full potential much like a flower in bloom. Eat Your Heart Out strive for the same heights on their full-length debut, Florescence [Fearless Records]. The Newcastle, Australia quintet—Caitlin Henry [vocals], Andrew Anderson [guitar], Will Moore [guitar], Dom Cant [bass], and Jake Cronin [drums]—progress personally and creatively over the course of eleven tracks artfully and articulately steeped in grunge realism, emo intimacy, punk panache, and pop ambition.
Florescence speaks directly to this pronounced growth for the musicians.
“It ties back into the process of flowering,” says Caitlin. “Over the last year, I’ve learned how to open up, express my emotions, and feel more as a person rather than pushing all of that way. For the first time, I feel like I had something I wanted to say. It was important and personal to get all of those thoughts and experiences out there. I’m finally talking about the feelings I have and my experiences becoming an adult woman. It’s a glimpse into my journal from the last year.”

Eat Your Heart Out are one of the winners of our Groovin The Moo competition and will be taking their pop punk sounds to the Groovin The Moo stage in Maitland on April 23.

Read Interview
Tell us about your music. How did you develop your sound?
We started out in a country town where the only other bands were hardcore, so we had quite a heavy influence right from the start but also wanted to be melodic and poppy. We haven't ever tried to push our sound in any certain direction, it just kind of happens.
What’s your greatest source of inspiration for making music?
We are inspired by all the bands (especially Australian ones) that make incredible music and manage to tour the world as their full time job.
You’re one of the winners of our Groovin The Moo competition. What can punters in Maitland expect from the Eat Your Heart Out live show?
Hot riffs and hair flips.
What’s the best advice you’ve been given and who was it from?
"Rock out the stage" - Mum
What Australian track would you play to cheer up someone who was crying?
Friday On My Mind by The Easybeats.
What Australian track would you play to someone to make them cry?
Laika by Wil Wagner. :'(
You’re the DJ at a party. The dance floor is pumping. What Australian track do you put on next?
Vitriol by Bluejuice. Banger!
What was the last local gig you went to? How was it?
Stepson and She Cries Wolf at Drone in Newcastle. Both super hardworking heavy bands that put on one hell of a tight show.
Tell us about the bands or people in the Newcastle music community that inspire you.
As far as bands go, definitely Trophy Eyes! They've worked super hard and written killer songs, and it's paid off.
And Bec Solman, the owner of Drone, one of the only all ages venues in Newcastle. Keeping the all ages scene alive!
What are your plans for 2016?
We have some new material very close to being released, and after that we hope to be back out playing shows around Aus as soon as possible!
View Profile Hide Interview 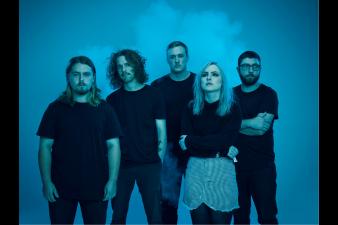 no more doubting pls, eat your heart out have a bloody great formula.

no more doubting pls, eat your heart out have a bloody great formula.

A great take from your new record and a personal favourite. It sets up the record so well. I just want to hug this song and never let go.

A great take from your new record and a personal favourite. It sets up the record so well. I just want to hug this song and never let go.

I implore you to add this to your two playlists that I'm sure you have - Charged Up Punk Rock BangerZ and Songs To Get Me Through A Big Cry.

I implore you to add this to your two playlists that I'm sure you have - Charged Up Punk Rock BangerZ and Songs To Get Me Through A Big Cry.