Fresh off the back of releasing their addictive single ‘YOU’ and making their return to live stages with THE VANNS, Eliza & The Delusionals return with more new music to satiate fans and newcomers alike.

The band’s latest single, ‘SAVE ME’ comes wrapped up in the brand of ‘90s / early ‘00s nostalgia they have endeared themselves to audiences with, while layering their own flair throughout. With ‘SAVE ME’, the group steps things up once again: the vocals swirl and filter through a dream haze of an arrangement beautifully, producing a sense of yearning that’s irresistible to listen to.

Written by Eliza Klatt and Kurt Skuse between sessions in Los Angeles with songwriter, musician and producer Keith Harris (Black Eyed Peas, Madonna) and then at their home studio in Australia, ‘SAVE ME’ changed all but slightly from its origins to the final version we’re hearing today.

‘SAVE ME’ was recorded in Brisbane, between Airlock Studios and the studio of award winning producer and engineer Kon Kersting (Tones And I), who was with Eliza & The Delusionals each step of the way. Also working with Leon Zervos (Troye Sivan, Holy Holy) on mastering, the sound Eliza & The Delusionals have continued to hone with this new song is gorgeous, glossy and refined.

2020 brought Eliza & The Delusionals huge success, with the release of both ‘Sentimental’ and breakthrough juggernaut ‘Just Exist’ bringing the band to international acclaim. With ‘Just Exist’, the group broke into the North American market, touring with Silversun Pickups and racking up successes on US radio; reaching #47 on the Alternative Radio charts, #1 on the SiriusXM Alt Nation chart and accumulating nearly 5 million streams worldwide.

Brisbane showstoppers Eliza and The Delusionals explore all waves of life with their rock-pop nature, fun melodies and nostalgic lyrics. Get to know them! Their our Feature Artist all this week on triple j Unearthed.

I think we really started to zone in on the sound of Eliza & The Delusionals after I saw Catfish & the Bottlemen supporting The Kooks a few years ago. Their album 'The Balcony' had a huge impact on the developnent of our music when we first started, and they have continued to inspire me with their second album. I always try to keep my artistic influences broad, and try to incorporate the inspiration from them into my songs.

I find my greatest source of inspiration for making music through my life experiences growing up, and continuing to understand all aspects of the world. I always try to present my songs in a way that people can relate to and hopefully find insight through.

What can punters expect from a Eliza & The Delusionals live show?

I like to think that people can expect a really fun and high energy show. I really want the audience to feel that they're a part of a unifying experience rather than just watching us performing. I love feeling this when I go to shows, so I really try to bring that to our gigs!

A lot of people have given me loads of great advice throughout my life but I don't think I can narrow it down to just one piece. I was actually stumped for ages on this question!

I'd have to say Polish Club's new track 'Come Party'. Who could feel sad listening to that tune?

Definitely 'Don't Let the Kids Win' by Julia Jacklin. It's such an emotional song and Julia is a profound songwriter.

I'd probably put on Confidence Man's tune 'Boyfriend', because it's honestly a party in itself.

I went and saw Bec Sandridge at The Foundry about a week or so ago, and it was great! I'm a huge fan of the 'Ridge. She was super friendly, and The Foundry is a really cool Brisbane venue.

I'm always inspired by seeing bands from Brisbane or the Gold Coast making an impact on Australia's music scene, like Cub Sport, The Belligerents and Amy Shark. It's so cool to watch musicians from your area release amazing music and get recognised for it across the country and the rest of the world!

We have a bunch of plans for 2017, mainly including releasing new music (which will be happening very soon). Another big goal is to play some festivals! I love going to festivals and I've wanted to be a part of one for so long, so I'm hoping this year we can make our way onto some festival line-ups! 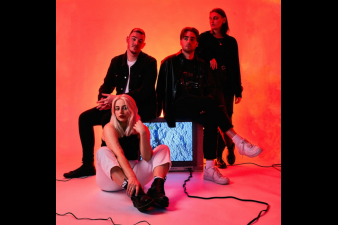 These artists will collaborate with NIDA's best to make a music video!
More

I'd happily let Eliza & The Delusionals soundtrack my entire life.

I'd happily let Eliza & The Delusionals soundtrack my entire life.

eliza & the delusionals deserve to be one of our greatest indie bands right now, they just keep serving up slices of brilliance and this one is shimmering with golden goodness.

eliza & the delusionals deserve to be one of our greatest indie bands right now, they just keep serving up slices of brilliance and this one is shimmering with golden goodness.

I've got a big 90's crush on this one! I love those bright guitars and how much you pop at the chorus Eliza. Great song!

I've got a big 90's crush on this one! I love those bright guitars and how much you pop at the chorus Eliza. Great song!