'Black Words' is the new single let loose from the lips of The Ellis Collective, the second release from their forthcoming album 'Carry'.

'Black Words' is a sentiment that features heavily on their second album - a patchwork of emotion that recounts the sadness, sickness, love and indecision that weaves its way through the fabric of everyday Australian life.

On 'Black Words' the band introduces a carefully crafted dark and melancholic sound - a sound that is as emotive as it is difficult to characterise.

While The Ellis Collective’s brutally honest take on Australian song writing is hard to pigeon hole, it has been described as:

Descriptions aside, The Ellis Collective's unmistakeably Australian sound continues to resonate with audiences across the country. After being 'Unearthed' by Triple J in 2011 the band have been lucky enough to find their way into the country’s most respected festivals including Groovin' The Moo, Woodford Music Festival and The National Folk Festival, sharing stages with some of the best in the biz including Architecture In Helsinki, Data Rock, House of Pain, Gotye and Washington.

• 'one of the most intelligent, compelling and honest male singer/songwriters to emerge in a long while' – Megan Rowe - Rhythms Magazine
• 'Emotive and gutsy... it takes our breath away' - BMA Magazine (Canberra)
• 'Unflinchingly honest... raw and powerful songwriting' - Rave Magazine (Brisbane)

The second single ‘Black Words’ is off The Ellis Collective’s upcoming album ‘Carry’ and is released this July through iTunes and Bandcamp. 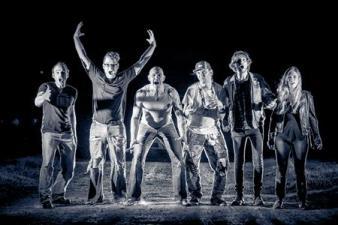 These 5 lucky acts will open Groovin the Moo when it steamrolls in to their paddock.
More

There's a classic Australian sound to these guys.

There's a classic Australian sound to these guys.