Since starting as a duo in 2016 Feels have received consistent industry respect and have been personally invited by Ableton to attend Ableton Loop Berlin, undertake studio residencies in Sydney and Auckland at Red Bull HQ as well as presenting at Ableton user groups across Australia, New Zealand and the USA.

In 2017, Feels won Triple J Unearthed ‘Listen Out’ Festival competition and made their debut festival appearance. They have since performed at Australian music festivals such as Falls Festival 2018 and 2019, Laneway Festival, Kickstart Festival, Perth International Arts Festival, Disrupted Festival and Groovin The Moo.

In addition to their festival appearances, Feels have supported the likes Ngaiire, Mansionair, Yeo, Kimbra, G Flip, Unknown Mortal Orchestra and Oribtal.
In 2017 Feels released their first single ‘Prior Engagement’ from their debut EP ‘Emerald’. The single received international praise from the likes of RedBull, Spotify (‘Fresh Finds’) and Apple Music (‘Best of The Week’). They have since followed this debut will multiple singles and EP which have received support from the likes of Triple J, BBC radio 1, Spotify and many community radio stations.

Their single ‘They Need Us (feat. Stella Donnelly)’ has made waves across the Australian music industry, receiving reviews claiming that the single is “one of this year’s best songs” - (Purple Sneakers) and featuring on Pilerats best songs of 2018 so far. Since this release in June 2018, the single has hit no. 1 on the Amrap metro charts featured on Apple Music’s ‘Best of The Week’ and Spotify’s ‘New Music Friday’.

Some of Feels’s recent achievements include showcasing at the 2018 Electronic Music Conference (EMC) in Sydney, presenting a TEDxPerth talk at the Perth Concert Hall November 2018 and being amongst the first Australian bands announced to showcase at SXSW 2019.

Feels recently showcased at SXSW Austin, Texas where they performed a massive 7 showcases in 7 days across the festival. Feels were the only instrumental electronic act to be invited to showcase at SXSW, in the whole of Australia. Feels are set to release two dynamic singles, each with a featuring vocalist, in the lead up to the release of their debut album in September 2019.

Feels are a percussive electronic outfit from Perth, and the winners of our 2017 Listen Out competition for WA! We're featuring their buoyant and bubbly tunes all this week on Unearthed.

Tell us about your music. How did you develop your sound?
Elise and Rosie met during high school when they were 14 at an after school percussion program. During a Djembe solo we locked eyes and from that day, we knew we would make music together. We both studied classical percussion at University and Elise went on to study composition. Our love for rhythm and classical composition has definitely influenced our sound and how we create a Feels track. We have always loved electronic music and wanted to find the balance between using our classical composition and percussion skills to created serious beats and shredding synth lines.

What’s your greatest source of inspiration for making music?
Rhythm is definitely our greatest inspiration and usually the main focus for our tracks. We like to find simple patterns and find ways to disrupt and manipulate them. We both play percussion every day, whether it be tutoring high school students, or playing for dancers at WAAPA. Playing has always been a huge inspiration for our music. Our study of many different styles of percussion music and composition has also been influential on our music.

What can punters expect from a FEELS live show?
Live drums, electronics and tinsel jackets! Oh, and a surfboard.

What’s the best advice you’ve been given and who was it from?
“Don’t place too much importance on one track or a certain release, you never know what can happen” – (Tim Shiel).
“Don’t fuck it up” – (RuPaul).

What Australian track would you play to cheer up someone who was crying?
Miss Blanks – ‘Clap Clap’.

What Australian track would you play to someone to make them cry?
Stella Donnelly – ‘Boys Will Be Boys’.

You’re the DJ at a party. The dance floor is pumping. What Australian track do you put on next?
Lewis Cancut – ‘Body Querty’.

What was the last local gig you went to? How was it?
BIGSOUND! We saw so many local bands it was amazing! Miss Blanks was definitely a highlight for us. It was great to see such a diverse range of artists at the festival. Being from Perth, it was amazing to see such a large representation of our local music scene.

Tell us about the bands or people in the Perth music community that inspire you.
Earlier this year, we co-founded WOMPP (Women of Music Production Perth) a platform for female, transgender and nonbinary music makers to share and discuss music production. We have monthly meetings to discuss electronic music production, share tracks and prepare for our biannual showcases. Through the creation of this community, we have met some of the most talent and inspiring individuals in the Perth music scene. Over this past year we have seen so many strong electronic acts form and more established artists become even more confident. Artists such as Alex and Yell, Lana Rothnie, G*Rey, WYN, Mei Saraswati, Jana Jaya Ayres, Jamilla and many more, are helping to shape the Perth music scene and the standards we set for equal gender representation within our city.

What are your plans for the future?
We have our debut EP Emerald coming out in November with 2 more singles in between. We’re very excited! We are heading to Berlin in November to attend ‘Ableton Loop’, an international music summit. We will also be doing an Ableton studio residency in Sydney January 2018 in which we hope to start writing a new album. We are definitely wanting to do an East coast tour in 2018 and release more new music! 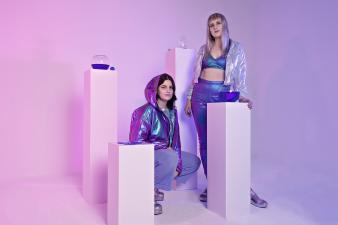 Oohoohohohhoh this bubbly pop rework is stunning. ZAN has such an ethereal angelic vocal, and Feels have really spun it and brought it to the club.

Oohoohohohhoh this bubbly pop rework is stunning. ZAN has such an ethereal angelic vocal, and Feels have really spun it and brought it to the club.

One of my very favourite songs of the year getting a rework from the inimitable Perth production duo FEELS? Don't mind if I do thanks.

One of my very favourite songs of the year getting a rework from the inimitable Perth production duo FEELS? Don't mind if I do thanks.

ZAN featured on a great Feels track ('Assemble') a couple of years back so I'm stoked to see the WA production team re-team for a remix of 'Tu' here. Those vocals from ZAN sublime with Feels' otherworldly electronica.

ZAN featured on a great Feels track ('Assemble') a couple of years back so I'm stoked to see the WA production team re-team for a remix of 'Tu' here. Those vocals from ZAN sublime with Feels' otherworldly electronica.