Shellac, The Breeders, The Jesus Lizard

Perth garage rockers FOAM are one of the winners of our Big Day Out competition. Catch the long-haired 3-piece opening the Essential Stage of the Perth Big Day Out on Monday 28 January.

We've been playing music together since high school, so we pretty much developed our taste as we know it now alongside each other. Early on we all shared an affinity for grunge and 'good' alternative rock, and that influence is still the backbone of the band. I've always felt that garage rock was the most fun I could have playing guitar, a punk ethos with a strong slathering of melody and emotion. Though sometimes it's also good to just go total angst. For us, simplicity is key, so we try and come out with what feels most natural, maintaining the idea that a great song could be played totally stripped back, or even transposed to a different genre, and still be a great song.

You’re one of the winners of our Big Day Out competition and will be opening the Essential Stage of the Perth Big Day Out - what can BDO punters expect from the FOAM live show?

We've been told a few times now that we're loud. That'll likely be the case on the day. Playing shows is our only form of exercise, so we like to make the most of it and get a good sweat going. If I fall entirely off the stage it won't be the first time.

Tell us about the bands, producers and people in the WA music community that inspire you?

I continue to be amazed by the people we meet in our time around the scene in Perth. It really is going on here. There are a few notables, Fat Shans record store/studio/badass venue opened up a little while ago and those guys have been doing a world of good supporting local artists. The whole team at RTR 92.1 run a damn fine alternative station, and with virtually everyone there being a volunteer it really shows how much passion there is. There are too many great bands to list, new one's are springing up all the time, and with Perth as small as it is you're never more than 3 degrees of separation away from them. Right now there's a really good 90's rock revival thing going on, or maybe that's just wishful thinking on my part!

I don't have a very musical family, so my first real rock show I went to with Jackson, it was the RollerCoaster Festival in Mandurah in (I think) 2008 when I was 14. The Living End were headlining, and we got there early enough to see Tame Impala, who were only just becoming a name on the radar by that point. Both were killer sets, and later in the day I lost my mosh virginity in front of Gyroscope, and later still I watched a bottle fly out of the crowd and take out Sneaky Sound System's singer. Turned out she'd been lip syncing. Yeah, interesting day.

We'll be coming over and playing our first Sydney and Melbourne shows in March, and by the end of that month our second EP, Run Kon Koma, will be out and hopefully kickin'. From there, who knows? But hopefully no more serious injuries.

...the only thing keeping us sane. 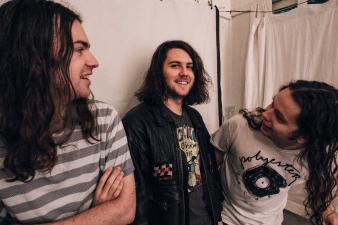 Congratulations to our 2013 Big Day Out winners!

hey'll each be opening the festival in their state, make sure you get down there early and check 'em out.
More
Download the triple j Unearthed app: