There's something captivating about watching a band hit their stride. For Brisbane/Sunshine Coast alt-gaze trio Fragile Animals, that time is now.

Their 2017 debut EP Light That Fades was met with a joyous welcome. While their sophomore EP ‘Only Shallow//Only More’ was the graduation with flying colours every band looks to strike upon. Songs from both releases found open ears and airplay at Triple J, becoming an Unearthed Feature Artist and winning a place on the line-up to their local Triple J presented Big Pineapple Music Festival.

Latest single ‘Only Until It’s Over’ serves up a banquet of catchy melodies from vocalist Victoria Jenkins delivering a rich slice of indie-rock amidst the powerful, driving rhythms of drummer Kyle Shipton and Daniel Parkinson's cavalcade of rich guitar tones.

Fragile Animals live prowess has gradually been honed over the last two years, not only crushing the stage at the aforementioned Big Pineapple Music Festival, but also within support slots with the likes of Polish Club, Flyying Colours, Bugs, Jebediah as well as on east coast tours of their own.

More music is recorded and ready, this time with ARIA nominated producer Dylan Adams (DMA’s, Skeggs, West Thebarton) on board. More touring is on the cards, but this time with one eye on Australia and the other on the world

Meet this week's Feature Artist, Fragile Animals.They'll be opening the stage this weekend as our Big Pineapple comp winners.

We’re pretty much an Indie Rock band in need of some cheering up...haha! We’ve definitely got a lot of love for shoegaze and I think that’s coming through more and more. The three of us have pretty similar taste in music which gives us a common ground to start from. But, when we write songs we all pull in different directions which is great.

What can punters expect from a Fragile Animals live show?

We’ve been told we’re more ‘intense’ live than people expect. I think that must be because we get really absorbed in what we’re doing. It means a lot to us to be a good live band.

We watched an interview with Nick Launay a little while ago and he was saying that people don’t achieve their dreams because they don’t recognise opportunities that come their way. I’m pretty sure he also said you should compliment people shoes...two solid bits of advice there.

‘Sugar and Spice’ by Hatchie. This track is all sorts of nice. It’s impossible to be sad listening to it.

‘Step Up The Morphine’ by DMA’s. I mean the line ‘Sometimes I wonder why we bother at all’ pretty much sums up the vibe here.

‘The Less I Know The Better’ by Tame Impala. That.Bass.Line.Is.Magic.

We were at Middle Kids last Friday night when they played at Woolly Mammoth in Brisbane. It was brilliant. We’ve seen them a bunch of times and they never disappoint. Future Haunts and Ruby Fields were supporting and they were incredible.

Tell us about the bands or people in the QLD music community that inspire you.

We get inspired when we see bands/artists/venues we adore doing well...and there’s been a lot of that lately! Seeing someone like Hatchie achieving such incredible and well-deserved success is inspiring. Same with bands like Jungle Giants and Geowulf. But for the most part, it’s little things that make an impression on us. We saw Waax play a little festival here on the coast last year, the crowd was really diverse and probably not what they were expecting. But they went out and absolutely killed it...that really taught us something.

So far 2018 has been very kind to us! We’ve had the pleasure of supporting some really cool bands and we’ve been pinching ourselves ever since we were announced as the Triple J Unearthed Big Pineapple Competition Winner. On top of all of that we’ve just finished recording our second EP...which means we’ll have new music on it’s way very soon, and a stack more shows to fit in before the year is out! 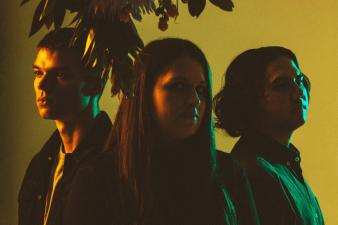