The Furrs is the brainchild of Gabriella Cohen and Jim Griffin, both songwriters in there early 20’s. The prolific duo started writing songs together in early 2013 and released a 4 track self titled EP in October, which included the singles ‘GET ON YOUR HORSE and ‘LITTLE BOY.

2014 has been a hugely productive year for The Furrs; supporting American Indie band Cults, Sydney newcomers DMA’s and Byron Bay’s The Babe Rainbow to name a few. The group has been busy in the studio recording a double-sided EP and plan to have another release out late 2014.

With a bunch of vivacious live performances under their belt The Furrs keep proving why they are one of the most exciting new acts to come out of Australia in 2014. Keep your eyes peeled for what comes next, if the past 6 months is anything to go by you can be sure its going to be quite a ride.

Brisbane 5-piece The Furrs crank out excellent 70's-inspired blues-tinged rock'n'roll with a healthy dose of swagger and fuzz.

Tell us about your music. How did you develop your sound?
Our sound is still a developing thing. It is constantly changing as we change.

What’s your greatest source of inspiration for making music?
Listening to our favourite artists, and being bowled over every time.

What can punters expect from The Furrs live show?
Sometimes we organise our friend to walk around with cheese platters.

What’s the best advice you’ve been given and who was it from?
It's funny we haven’t gotten advice yet… maybe you can give us some advice?

What Australian track would you play to cheer up someone who was crying?
What a sad thing to say! Probably 'Little Boy' by The Furrs. Knock them back into action.

What Australian track would you play to someone to make them cry?
I would never want to do to that. But ‘Breathe Me’ by Sia does a pretty good job of that.

What was the last local gig you went to? How was it?
We went to a gig held somewhere and I can’t even tell you how bad it was... no humour... humour is very important I think.

Tell us about the bands or people in the Brisbane music community that inspire you.
I absolutely love Brisbane at the moment. There is a wandering cowboy who has come into our lives and with his band ‘The Family Jordan’. He has inspired all of us to really sit around and play each others songs together. It's straight up. We record in our lounge room - the other day he scorned me for not picking my guitar up for two days, and you know what? He’s right. It's really really good to play music with your friends without these weird expectations or limitations… everyone should be singing their songs to everyone.

What are your plans for The Furrs in 2014?
I guess we’ll just keep on doing what we’re doing. 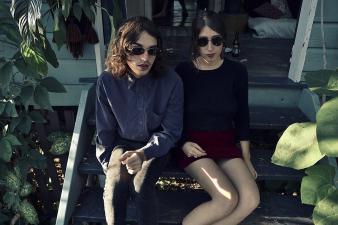 Congratulations to The Furrs and WAAX

Brisbane bands The Furrs and WAAX have won a spot on the triple j Unearthed BIGSOUND showcase lineup!
More

Great 'tude and energy here, especially in the vocals (tré cool). It's refreshing to hear scuzzy blues rock with a confident female singer. I think the track overstays it's welcome by a minute or so - but that might just be me.

Great 'tude and energy here, especially in the vocals (tré cool). It's refreshing to hear scuzzy blues rock with a confident female singer. I think the track overstays it's welcome by a minute or so - but that might just be me.

Get On Your Horse

nailed it again. healthy amount of swagger and fuzz. bring on 'the difficult third (song) album'.

nailed it again. healthy amount of swagger and fuzz. bring on 'the difficult third (song) album'.