18 year old rapper Genesis Owusu embraces the weird, both in himself and in his music. You'll hear him blending jazz with hip hop in a style that he likes to call 21st Century punk-jazz.

I've been exposed to music since the womb; my mum leads a church choir and you could probably find any genre you're looking for if you search hard enough in my dad's CD collection. My brother was originally a guitarist so he would strictly listen to Red Hot Chili Peppers, Rage Against the Machine and anything in that field. Music generally reflects the artist making it so I suppose that's why genre-blending is such a big aspect of my music.

You're playing Laneway in Sydney for Unearthed. What can punters expect from a Genesis Owusu live show?

Kanye West once told me, "You see there's leaders and there's followers, but I'd rather be a dick than a swallower."

If "WDUBI" by Baro doesn't dry your eyes I don't know what will.

My friend Charlesworth made this track called "In Need" which is so damn beautiful. King Krule vibes.

I did this really chill afternoon session on Sunday at a bar in Canberra called Akiba and it was such a pretty sight. Just people of all ages sitting around on a Sunday listening to jazz and rap, and people rapping on top of jazz; AND there was dumplings. What more could you want?

Narit "Noodle" Kimsat is the prince of Canberra; he's not a musician but he's the organiser of anything and everything. And if he didn't organise it, he told you about it. Even if he didn't tell you about it, he'll still be there, handing you free dumplings or something (he's the one who organised the event from the last question).

My brother, Citizen Kay, essentially got me into the music scene and is still my sole recording engineer to this day. I have to give mad love to groups like Mondecreen and Brass Knuckle Brass Band for making super wild, cross-genre music and also for incorporating saxophones into their music (the saxophone is the sexiest instrument in human history, you CANNOT argue with me about this). People like Coda Conduct, Jimmy Pike and Jedbrii are some of the most fire spitters I've ever seen or heard. I could go on forever; basically the CBR ZOO is LIVE. Also #reecegurney.

To make you see my face and hear my voice a whole lot more. I'm also thinking of starting a book club so if anyone's keen hmu. 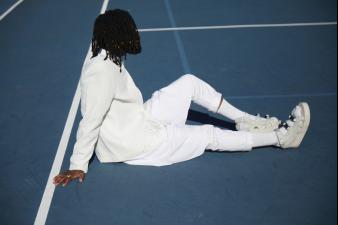 I'm on my third listen in a row and can't wipe the stank off my face.

I'm on my third listen in a row and can't wipe the stank off my face.

2018 has been the year for Australian hip hop thanks to artists like Genesis, who just continues to punch out tracks of such a high, international standard. Keep it coming, man.

2018 has been the year for Australian hip hop thanks to artists like Genesis, who just continues to punch out tracks of such a high, international standard. Keep it coming, man.

How are you so good? Fr in my books Genesis Owusu is one of the most exciting artists in the country at the moment.

How are you so good? Fr in my books Genesis Owusu is one of the most exciting artists in the country at the moment.