Every Time I Die, The Chariot, Converge, Birds In Row, Cancer Bats

As premiered on triple j's Short.Fast.Loud, Adelaide hardcore metallers A Ghost Orchestra return with 'Precursor', an aptly titled first single and taste from their debut album 'Blood', out February 24, 2017 via Firestarter Distribution.

The accompanying video, directed by Aaron Schuppan, shows the conception of the album artwork itself with artist Joel Van Moore (Vans the Omega) bound by no design parameters and instinctively painting while listening to the record.

Vocalist Adam Geisler says of the process, "We thought it would be great to capture this idea as the basis of our clip for Precursor because Joel said himself he had no idea what he was going to paint until he got in the moment and started putting colour on the wall. It was all about an expressive release from listening to the music which was being blasted out from behind him."

Fast approaching the summit of their hard work and dedication, A Ghost Orchestra have been storming stages since their inception in 2012, becoming the go-to support of choice for heavyweights like Norma Jean, Every Time I Die, The Amity Affliction, In Hearts Wake, Protest the Hero, Silverstein and more.

Their 2014 EP 'Vile Hymns' introduced the band with a ferocious 20-minute journey of metal injected with post-hardcore and southern rock. Before too long they were playing the main stage at Soundwave and well on the way to cementing their own reputation as an astounding live act.

The 11 track offering of 'Blood' delivers what A Ghost Orchestra's fans have been waiting for. Co-produced by the band and uber-talented engineer Julian Renzo, 'Blood' captures the intensity of A Ghost Orchestra's live sound as well as all of its creative nuances. Even the band's own name is perfectly suited to the music they write – heavy, unconventional and beautifully unpleasant.

This is the path that the chaotic South Australian four-piece are walking and now they're armed with one of the best albums to kick off the new year.

"A Ghost Orchestra are one of Australia's finest purveyors of noisy destruction.” chuckingamosh.com

New single 'Precursor' is out now via all good digital retailers

A Ghost Orchestra are our 2015 Adelaide Soundwave Festival comp winners, and the 4-piece hardcore outfit are set to decimate the festival main stage this Sunday.

Hear them on Unearthed Digital this week discussing Adelaide's heavy clique and their deadset DIY attitude.

A Ghost Orchestra still has the same framework we started with in 2012. The initial idea was crossover of groove hardcore and southern hardcore. As time has moved on we’ve had a few lineup changes and new influences have come in and out. Now we have a solid 4-piece consisting of a newish bass player and drummer (both good mates). We also have elements of stoner rock, metallic hardcore and thrash.

Continuing to explore different sounds and to play live shows. We want to keep the energy high and just have fun with the music we enjoy creating.

What can punters expect from A Ghost Orchestra live show?

We really dislike watching boring bands that don’t emit energy live. We believe if you’ve paid money and made an effort to come and see us we will do our best to put on an awesome show for you. Pretty much anything goes at our shows.

“I was just on the roof, you guys need to turn down” – Jay, Bombshelter Rehersals.

Never Had So Much Fun – Frenzal Rhomb.

All the bands we looked up to as young musicians in Adelaide (IKTP, The Rivalry (reunion needs to happen), Cry Murder, Stronghold, The Burning Sea, DOC), Craig from Enigma, Ryan Sweeny at Chuckingamosh, our friends who continue to support us and the band.

More tours, an album, meet as many people as we can and just enjoy being in a band that we love being a part of! 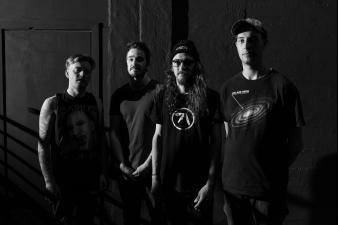 Congrats to our 2015 Soundwave winners!

Oh my god, this is like being fed into a woodchipper. I love it.

Oh my god, this is like being fed into a woodchipper. I love it.