Girl In The Red Light

Girl In the Red light are a young band from Wagga Wagga NSW, consisting of Felix Colman Rye Logan, Ewan Harding , Zac Cunningham . Since Forming in mid 2008, Girl In the Red Light has covered a large amount of ground playing across NSW and Victoria exposing their Alternative Indie rock sounds. ‘GIRL’ recorded their first 5 track EP ‘In Conversation’ at A# studio’s in Sydney with Jordy (Shady) Lane in October (2008). ‘In Conversation’ was never officially released but was reproduced by hand at home, Over 500 copies were given out at live shows including a tour with British India in country Victoria (February) and other performances with Little Red, Sparkadia, Faker, Former Child Stars, Bang Bang Eche and played at Dusty Days (festival). In mid 2009 Girl In the Red Light embarked on their next 5 track EP which was recorded at Hot House Studio in St Kilda with the Charming Finn Keane and Craig Harnath. The recording of the EP ‘Math Of Trend’ was finished in late 2009, and was mastered by Jack The Bear Mastering, ‘Math Of Trend’ was recorded over a span of 5 months. In between the sessions of recording, GIRL performed shows with BlueJuice, British India, MM9 and played at both Beeramid (Fest) and Village Fair (Fest) which provided some much needed capital to fund the EP and to also to trial songs. Girl In the Red Light are still playing high energy, high excitement shows and are still always looking to the future, with ‘ Math Of Trend’ was released on the 26th of March 2010. It should be on itunes soon . myspace.com/girlintheredlight

Girl In The Red Light 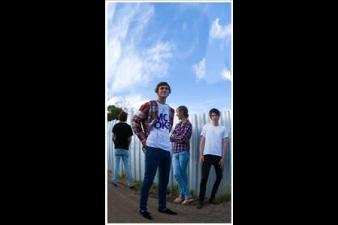 These guys will be joining Urthboy at the Indent regional shows.
More
More Reviews
Download the triple j Unearthed app: