Originating from Byron Bay but now calling Sydney home GLASS TOWERS were born out of a solo recording project of front man Ben Hannam, and forged in the summer of 2008 with the addition of guitarist Sam Speck, bassist Cameron Holdstock and drummer Daniel Muszynski. The past couple of years have seen the band walk a path of highs, from having ARIA Award winning producer Wayne Connolly, ask to take the helm of their 2011 debut EP "What We Were, When We Were". To having the legendary Neil Finn personally select and invite the band on tour with him (in support of his latest musical project Pajama Club). Earning spots at festivals such as Splendour In The Grass, and keeping up a relentless touring schedule along the way; they’ve shared the stage with Cloud Control, Tame Impala, Metronomy, Bluejuice, The Holidays, Children Collide, Hungry Kids Of Hungary, The Vasco Era, Papa Vs Pretty, Last Dinosaurs, Guineafowl and many more. The bands’ list of influences is pages long and varied coming from all over. From the literary genius of Jack Kerouac to the madcap mind of Syd Barrett and effortless cool of Lou Reed, from a childhood raised on a somewhat oddball mixture of Neil Diamond, Roxy Music and Simon & Garfunkel, to the paintings of J.M.W Turner and photographs of Robert Doisneau. And then there is the influence that life holds itself, each GLASS TOWERS’ song is a sonic snapshot from a specific time in Hannam’s past. The new single, "JUMANJI" was recently added to high rotation on triple j and FBi Radio. The track presents breezy tropical chords, smart snappy guitar interplay, epic soaring choruses (featuring the beautiful, serene voice of upcoming Sydney songstress Jordan Leser) and young love on long wistful carefree weekends. The single was produced and mixed by Jean-Paul Fung (JP) a young in-demand producer know for his work with Birds Of Tokyo, Bluejuice and Last Dinosaurs. Guy Davies (Bloc Party, Foals) out the final touches on the song at Electric Mastering, UK. It's the first blissful taste of the bands’ forthcoming debut album, an album that has been four years in the making, but four years well spent.

We started off playing Silverchair and Vines covers in Daniels garage back in 2008 though our sound kept variating through different bands we were listening to, it wasnt until the start of last year where we began to write songs based around our main influences ie - Pavement, Sonic Youth, Bloc Party and Foals. We've now settled into our current sound which we can see us sticking too, one person has desribed it as "90's Slacker Indie Rock" though we don't like to tag ourselves as any particular genre.

We began playing music through school in our music class where we all met, each of us sharing the same musical influences and ideas.The bands that originate through Alstonville High always have a particular sound and feel about them influenced by the area we live in, Byron Bay/North Coast. There isnt such a big music scene for our genre of music and so we have to travel and play in Brisbane as often as we can where we're planning to base ourselves at the end of the year. Our school has always been very supportive of our band and helped us out whenever they can ie - borrowing leads and amps and our friends always help out wherever possible.

We've been consistently gigging in Brisbane and around Byron Bay since we formed and were fortunate enough to open the mainstage at Splendour In The Grass last year. That was an incredible experience for us as we met many of our musical heroes and people who we've always looked up to. We've also been lucky enough to play alongside bands such as Tame Impala, Bluejuice and Cloud Control. Our live shows are alot more energetic and up tempo then our recordings, we try to put on the best possible show we can because we know what its like to see a band you really admire and then be slightly let down by their live performance.

We are hoping to have our Debut Ep out by the end of the year and play as many shows as we can while completing the HSC to support the release. Basically trying to get as much exposure as we can, getting our name out there through gigs and radio play.

The current Australian music scene is more stronger and varied than ever. The Brisbane scene which we've personally been involved in is filled with many diverse and vibrant acts and there is a stong music community intertwined throughout the city. All the bands are good friends with eachother and get along really well which is a very positive thing to see. 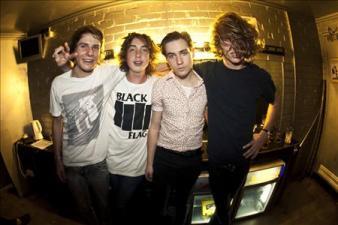 These guys will be joining Urthboy at the Indent regional shows.
More

There's still that tropical energy in the racing rhythms and chiming guitar but this is much tougher, and all the better for it. Glass Towers showing a bit of grunt and muscle.

There's still that tropical energy in the racing rhythms and chiming guitar but this is much tougher, and all the better for it. Glass Towers showing a bit of grunt and muscle.