Mandurah party starters, Good Doogs are this weeks triple j Unearthed Feature Artist. Be sure not to miss them this weekend as they open Groovin the Moo in Bunbury.

Our Sound is hugely influenced by the “Californian Sound” bands like Best Coast, Wavves, Cloud Nothings and Fidlar but with our own Australian twist on it.

Having fun! The responses of people after shows, it’s a pretty surreal feeling to know that you and your music is the reason that someone is so psyched. We just wanna have fun forever and music is our outlet for that.

What can punters expect from a Good Doogs live show?

Hahaha umm... really high energy, lots of fun and lots of smiles. As we said, we just wanna have fun. That’s why we do it!

I can’t remember who told me this, but the advice that has probably best served us to this point is, "don’t play every show that you are offered". Play the shows that will further the band (good support slots for bands that are bigger than you or good headline slots for the money you deserve) if you aren’t getting anything from the show, there is no point in playing it. Every band has a certain amount of “hype points” and if you spend them all really quickly on bad shows then no one will come to your good shows when you need them to!

I think it’s nearly impossible to be devo when “Spring Has Sprung” by Skegss is playing. The whole song is just super upbeat and dreamy then the lyrics are literally about it coming into summertime and better weather and all the good shit associated with that.

I’d play them “Not Worth Hiding” by Alex the Astronaut. I’d get them to really listen to the lyrics and put themselves in that position growing up gay in a world that hasn’t necessarily been completely accepting of gay people. The lyrics in that song are super strong and I reckon would get more than a few people.

'Covered in Chrome' by Violent Soho. 100% go-to-song to psych any crowd up haha.

Went to The Drop festival in Margaret River with Dune Rats and Ruby Fields and it was sick. They don’t get heaps of gigs down there so the crowd get real psyched and the vibe is sick at those shows.

Tell us about the bands or people in the Mandurah music community that inspire you.

That’s kind of the thing about Mandurah, we don’t really have an established music scene. Anyone that gets any good seems to move away, we don’t even have a live music venue in Mandurah which is sad for a city with 150k people. There are still a couple of bands here, but I guess we are kind of the trailblazers in the music scene here at the moment, but that in itself inspires me. The fact that I know we have other bands in Mandurah looking up to us makes me want to push harder to get further and use our position to further establish a music scene in Mandurah for the next crop of kids coming through - something that we didn’t really have.

2018...hopefully get to Bigsound in September. We have another single coming out in a couple of weeks and going out on tour with Tired Lion too. Looking to release more songs, possibly an EP towards the end of the year but I suppose it will depend on what happens at Bigsound. Whatever happens, we plan on having fun! 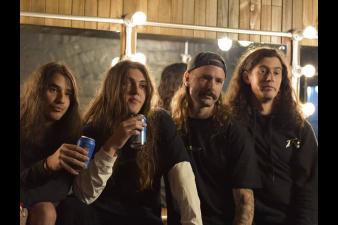