Continuing to make their mark on 2019 with some catchy, irresistible indie music, Wollongong four-piece GOSH announce the latest chapter in their body of work, the evocative new track, ‘Take Me Home’. Taken from their new EP Frankenstein, ‘Take Me Home’ is a prime example of the band’s consistently refined sense of songwriting and their handle on pop nuance.

Equal parts lamentation and nostalgic reflection, ‘Take Me Home’ revels in rich guitar and keys arrangements as the chorus explodes with chest-punching fervour. Existing in the same sonic realm as the likes of Boy & Bear, Catfish and the Bottlemen and Gang of Youths, GOSH have jammed emotion in spades into their new single, a bright indicator of what is to come from Frankenstein, come its release later in September.

Recorded at The Grove Studios with Jack Nigro (Birds of Tokyo, Sarah Blasko) and mastered by Steve Smart (Cub Sport, Tash Sultana), ‘Take Me Home’ came to fruition beautifully under the guise of some of the best in the game, after initially presenting itself in a few different guises. “The plan was never to make it a single, but it sort of took on this whole new feeling in the recording process, and every section just came to life and ended up turning the whole piece into a journey, so to speak.” GOSH

With a focus on the breaking point of a relationship, the single is accessible and relatable to the listener, while also demonstrating a personal songwriting style that has been built up so well by the band over the last few years. “Each section of the song, both musically and lyrically reflects a shift in mindset, and depicts the mental circles one goes through when faced with an emotionally charged decision. ‘Take Me Home’ is a song about reaching a breaking point in a relationship, and the wavering confidence that comes with ending something that once brought so much happiness.” GOSH

The band’s year has been a fruitful one; the release of singles ‘Say Another Thing’ and ‘Never Lose You’ further positioned GOSH as a band to watch coming out of the South Coast, while the industry attention continued to focus on them after they took out Triple J Unearthed’s Yours & Owls Festival competition in 2018.

Fans around the country have been gaining an insight into the power driving the GOSH live show through 2019, with successful headline shows and recent tour spots with Pacific Avenue winning over new fans and further ticking the boxes for longtime fans alike. 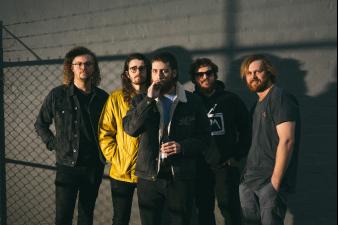 GOSH sounding a little more tougher and more epic than before on this new track. Not mad about this evolution.

GOSH sounding a little more tougher and more epic than before on this new track. Not mad about this evolution.

there's traces of gang of youths in this emphatic new one from gosh. it's big and passionate.

there's traces of gang of youths in this emphatic new one from gosh. it's big and passionate.