Buy the H E A R T O F A L I O N E P here - http://bit.ly/UHXetE The Chameleons of pop, the beating drums of euphoria. Music is in the veins. Music is better enjoyed together. www.thegriswolds.com.au www.twitter.com/wethegriswolds www.facebook.com/thegriswolds

Sydney indie-popsters The Griswolds are one of the winners of our Parklife competition. They'll be opening Parklife Sydney this Sunday 30th September at Centennial Park.

The sound came about through a need to be writing and playing music that we love to listen to, (and also through a love of tequila shots whilst song writing). Both Dan & I were playing in various other bands, but neither of us had any great love for what we we're doing. When the Griswolds formed, it felt like magic for us, everything just made 100% sense, and the songs & sounds were birthed so easily because we loved what we were doing, and we had a crap load of fun in the process, which we think comes across in the songs!

You’re one of the winners of our PARKLIFE competition. What can Parklife punters in Sydney expect from The Griswolds live show?

We're actually hoping (if its permissible) that we can re-enact our film clip at Parklife!!! It's gonna be pretty huge if we can get permission!! We're making big tie-dyed flags and we're going to be giving out coloured powder for everyone in the crowd to throw around and get interactive with our show!! Other than that, everyone can expect that we'll be having the time of our lives on stage, so hopefully we can all have a dance and a sing-along together at Parklife!

What most excites you about playing and attending Parklife 2012?

We just love the festival atmosphere, there's really nothing like it! It’s a special thing to be able to running around and checking out all your favourite bands in one place, it’s ridiculous loads of fun. We're really looking forward to seeing Bondi Hipsters and Tame Impala!

I think my earliest memory of an Australian live act would have be catching Frenzal Rhomb at Manly Youth Centre, as kids it felt we were there every weekend watching bands!

Our debut EP comes out on the 28/9 and we're on tour for pretty much the rest of the year, all of our dates will be on our Unearthed website!! other than that we'll be releasing another single and another film clip towards the end of the year too!

...the beez knees right now!! It's so great to have so many excellent live shows to attend in your own backyard! We luurrrv Tim Hart, The Belligerents, Oceanics, The Money go Round, Hey Geronimo, Last Dinos, San Cisco, Rufus, Cloud Control, Blue Juice, Jinja Safari and way too many more!! We are always looking around at other acts emerging from Australia and getting our minds blown on a daily basis. We are so lucky to be a part of this right now, there’s something exciting happening, Gotye, Boy & Bear, Kimbra, The Presets, Tame Impala, The Temper Trap etc are making such massive waves on other shores that it’s making the rest of the world look to Australia for what else is emerging. I see Australian artists becoming as influential as the USA & the UK in the next few years, or so we would hope. 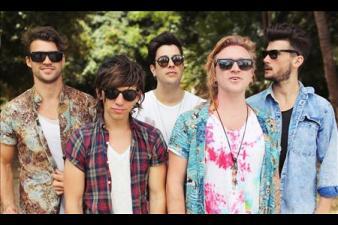 You've got an iron like grip on how to make pop music the right way (oh shit, those falsettos!). Count me in.

You've got an iron like grip on how to make pop music the right way (oh shit, those falsettos!). Count me in.

It's tight. You're talented. But I'm getting so tired of bands playing West-African inspired pop, singing about places they've probably never been.

It's tight. You're talented. But I'm getting so tired of bands playing West-African inspired pop, singing about places they've probably never been.

Heart of a Lion

A big bash of near perfect pop. Your seemingly endless reserves of energy just kills me.

A big bash of near perfect pop. Your seemingly endless reserves of energy just kills me.