With origins in the Punk/Hardcore scene, Harbours was formed as a project between past & current members of Sierra, Ocean Grove & In Elegance. In our short time as a band we have played alongside The Story So Far (US), Neck Deep (UK), State Champs (US) & Real Friends (US).

Before they tee off at the 2016 UNIFY gathering next weekend as our Unearthed comp winners, we're featuring Melbourne legends Harbours all this week!

Tell us about your music. How did you develop your sound?
The demo we released when we started the band was mostly written by our vocalist, Tory. It wasn't until we got into a room and started writing as a band that all these other influences started creeping in. We all have a background in the hardcore scene, so our new material is a little more aggressive, while still maintaining a pop sensibility.

What’s your greatest source of inspiration for making music?
We look up to a lot of our friends in bands and the sacrifices they make to be able to tour full time. Hopefully we can follow and do the same!

You’re one of the winners of our Unify competition. What can punters at the Unify festival in Gippsland expect from the Harbours live show?
It's a shorter set, we've cut a few of the ballads so expect 20mins of high energy & riffs.

What’s the best advice you’ve been given and who was it from?
Pick Harder - THE Steven Cannatelli

What Australian track would you play to cheer up someone who was crying?
Pretty much anything by Tame Impala.

What Australian track would you play to someone to make them cry?
No Control by a band called Holland.
Their lead singer is now killing it as a pop star and I don't think too many people know about his past project!

You’re the DJ at a party. The dance floor is pumping. What Australian track do you put on next?
Sunken Eyes - Sunk Loto

What was the last local gig you went to? How was it?
Invasion Fest.
Was a great day filled with a lot of Underground talent from around the country.

Tell us about the bands or people in the Melbourne music community that inspire you.
Our friend Running Touch is killing it at the moment. Check out Ocean Grove too.

What are your plans for 2016?
Become a staple in Aussie Rock. 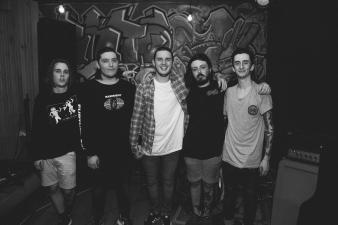 The Melbourne heavies will take on UNIFY in 2016!
More

There's a stack of energy and angst on this one, it's a beast.

There's a stack of energy and angst on this one, it's a beast.

The first thing is that this SOUNDS massive, so whoever produced this has done a fantastic job. It's got all the elements of a great post-punk song, and lo and behold, it is one.

The first thing is that this SOUNDS massive, so whoever produced this has done a fantastic job. It's got all the elements of a great post-punk song, and lo and behold, it is one.