It's been a little while in between Unearthed drinks for Melbourne based singer/songwriter & producer Hayden Calnin. Since beginning his musical journey, he's released a whole bunch of tunes, a couple of EPs followed by the independent release of his debut two part Cut Love album in 2016.

The past couple of years of releases have garnered some rad stuff including kudos from international blogs, spins overseas on radio stations like BBC6 and KCRW , sold out shows in Australia and the UK as well as some pretty ace syncs on US TV shows like Suits, The Vampire Diaries, The 100, Teen Wolf & Parenthood.

After spending some time touring overseas and producing for other awesome Unearthed artists like nyck, Harrison Storm, Batts and Didirri, Hayden's back with his new track 'Waves', mixed & mastered by Andrei Eremin and taken from his upcoming EP 'Dirt'; A conceptual piece exploring mental health issues with youth.
________________________

Hayden Calnin is a talented singer, songwriter and producer from Melbourne. Garnering ambiguous labels such as 'progressive folk' and 'loop crooner', he creates captivating songs that showcase his impressive voice and gentle layered production.

It's commonly described as progressive folk, which is a pretty accurate description I guess. My songs usual build and build to some sort of big finish. My sound has changed dramatically throughout the last year or so. I studied film at university, and my major was in sound design, so I put a lot of what I learnt at uni into my production. It tends to be quite soundscape oriented and atmospheric.

You’re releasing your debut EP this month. What’s the creative and recording process for that been like?

For this EP, I produced and recorded it myself at home. Because I have no time restraints at home, I tended to demo each track on the EP a few times before doing the final version of it. For example, 'For My Help' originally started as an 8 minute track, and I ended up cutting it down to just over 4 minutes. But that's just how I work when recording, I like to play around a lot, until it feels right.

So despite being somewhat of a ‘bedroom producer’ you also gig regularly. What’s the Hayden Calnin live show like?

I've often been described by people as a 'loop crooner'. Which is basically what you'll get. I use a loop station and build up my songs with my own harmonies and instrumentation. It sticks to the whole progressive folk thing, as the songs will just build and build. Recently, I've been working with a few musicians, and I want to get a band together really soon to play with me on a regular basis.

Tell us about the bands and people in the Melbourne music community that inspire you.

Melbourne has so many great bands. I'm fortunate enough to be surrounded by some great musicians and friends that make ridiculously good music. Leaks, Sleep Decade, Love Migrate, and Tom Milek, to mention a few, are some really great Melbourne acts that I've done a few shows with that are worth checking out if you get the chance. They all put on great shows and write some pretty top notch tunes.

Currently, I'm doing a residency at the Toff in Town in Melbourne on Monday nights in July with support from 'Manor'. I'm releasing my debut EP 'City' on July 20 and launching it at The Workers Club on the 24th of August, which I can't wait for. That'll be pretty sick. Apart from that, I'm hopefully gonna do a little tour up the coast for the EP, and then I'll get back into recording for the next release and continue to play shows of course.

...better than Eurovision, but nowhere near as popular. Go figure. 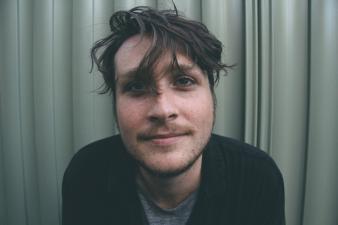 Congratulations to our 2012 Falls Festival winners!

Blah, this is so beautiful.

Blah, this is so beautiful.

The influences are clear. The talent is what he's done with them.

The influences are clear. The talent is what he's done with them.

Letting those manipulated vocals and piano crash allllll over me. A total stunner, great to hear from you again.

Letting those manipulated vocals and piano crash allllll over me. A total stunner, great to hear from you again.