Brand new single "Can't Have Them" OUT NOW

Hockey Dad are excited to release their brand new single "Can't Have Them" with brand new B-side "Girl With Two Hearts". Following on from the recent success of I Need A Woman, the track continues to highlight the bands gritty but melodic brand of surf influenced rock.

Fresh off the back of a national tour with DZ Deathrays and Bass Drum Of Death, the band are also excited to announce they will be heading out on a national Australian tour this September with The Jungle Giants, gearing up for New York's CMJ and more USA dates throughout October.

Listen to their new single ‘Can't Have Them’ right here, on Unearthed.

Fuzzed-out surf pop duo Hockey Dad have capped off a huge year by winning our Falls Festival competition. You can catch these Leisure Coast legends on stage at Falls in Byron Bay this New Years Eve.

Read Interview
Tell us about your music. How did you develop your sound?
It's really hard to determine how we developed our sound, as it was never forced. The music we listen to would have to be an obvious influence, although I think being best mates for 13 years has really inspired us to to write songs that simply just feel natural to us.
What’s your greatest source of inspiration for making music?
Our ridiculous tastes in music. We could be jamming out to Aretha Franklin, and a moment later we'd throw on some Beastie Boys and fire up. I think we've slowly become more open minded with the songs we listen to, which is cool. There's always something to take from every genre.
You’re the winners of our Falls Festival competition. What can punters at Falls in Byron Bay expect from the Hockey Dad live show?
Being regular punters ourselves, we've always been watching bands having the time of their lives at epic festivals, so we're unbelievably stoked to finally be having a dig ourselves! For the legends that come see us... you can expect blood, sweat and beers... sprinkled with cheeky grins and a few brand new songs!
What’s the best advice you’ve been given and who was it from?
When we were chilling with the Duniez fellas down the coast one weekend, Danny was chatting with us about the decision to not have a bass player. The one thing we remember from that night, was him saying "You guys just do what you want to do, don't worry about what other people want. As long as you're having fun, people will be diggin it."
What Australian track would you play to cheer up someone who was crying?
Mylee Grace & Ozzy Wrong - 'Lady Lady Lady'. I don't think it's possible to listen to this song without smiling and bopping your head around. We're massive fans of their playful lyrics and overall vibe. Close your eyes and drift away to your own little world full of rainbows, watermelons and sunshine.
What Australian track would you play to someone to make them cry?
Bad Dreems - 'My Only Friend'. A real heartbreaker from a bunch of boofheads. Who said that true blue Aussie battlers can't be emotional? Sometimes we all need a Hi-Vis covered shoulder to lean on.
You’re the DJ at a party. The dance floor is pumping. What Australian track do you put on next?
Midnight Oil - 'Beds Are Burning'. Fair dinkum, mate.
What was the last local gig you went to? How was it?
Our new mates The Moving Stills played at our managers bar in the 'Gong recently. It's so sick to see young dudes who are setting goals and are stoked to be playing shows. Keep an ear out for these legends.
Tell us about the bands or people in your local music community that inspire you.
Wollongong is becoming such a tight little community of musicians, it's epic. Pretty much it's just all about hanging with your bruzzies and getting stoked on each other's music. After all, that's what being in a band is all about.
What are your plans for 2015?
2015 will be purely dedicated to the All Aussie Adventures of Hockey Dad, which is super exciting. Other than recording our next release throughout January, then touring with bruzzies DZ Deathrays and legends Bass Drum Of Death shortly afterwards, it's all up in the air at the moment. Although I'm sure we'll keep writing songs, playing shows and frothing out.
View Profile Hide Interview 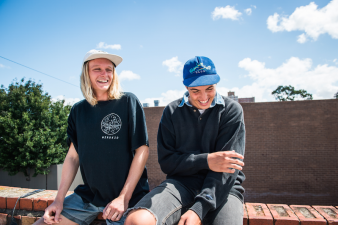 Congratulations to our 2014 Falls Festival winners!

Violet Swells will play Marion Bay, GL will play Lorne, and Hockey Dad will play at Byron as this year's Unearthed winners. Be sure to check them out!
More

By this point I've come to expect nothing less than wonderful songwriting and deft execution from Hockey Dad and you've delivered. It's a wild time.

By this point I've come to expect nothing less than wonderful songwriting and deft execution from Hockey Dad and you've delivered. It's a wild time.

The relentless touring these bois have been doing seems to have given that extra tightness in the studio. Yeah it's got that whirling, reckless energy but it's so dang nice and precise.

The relentless touring these bois have been doing seems to have given that extra tightness in the studio. Yeah it's got that whirling, reckless energy but it's so dang nice and precise.

Why you wanna make a grown man cry?

Why you wanna make a grown man cry?