Brisbane's Holiday Party have released their new single and video ‘Let Down’, premiered via Home & Hosed on triple j. A simple yet sparkly ode to being stuck in a loop, it’s the next taste of the pop duo's full-length album landing later this year.

Paired with the production talent of Luke McDonald and the warm vocals of Mel Tickle, ‘Let Down’ seamlessly blends to form an intricately produced electro-pop tune, driven by its disco bassline with subtle sonic embellishments.

Drawing influences from the likes of The Avalanches, Beach House, Animal Collective and JDilla, Mel and Luke have developed their signature junkyard pop style through homemade samples and love of pop culture. Following the release of singles 'Run Away'', 'No One' and 'Dream State', the past few years the band have seen a stream of success. Performance highlights include Mountain Goat Valley Crawl 2018 and BIGSOUND 2019, whilst also playing alongside artists such as Jack River, Donny Benet, Cloud Control, Hatchie, Party Dozen and GL. The two have also received nominations for the electronic/dance category in both the 2019 and 2020 Queensland Music Awards, full rotation on Double J for their previous track ‘No One’ as well as airplay on triple j and community radio stations. ‘No One’ was also added to Spotify playlists Broads Chords, New Music Friday AU & NZ and Indie Mixtape, and it’s video chosen as rage’s ‘Wild One Of The Week’.

Brisbane dream team and BIGSOUND comp winners, Holiday Party bring you their glistening debut single 'I'm Still Here', a masterpiece of clever production in a montage of uniquely blended sound. Catch them this week as they play some of their first ever live shows at BIGSOUND.

We usually develop our sound by rummaging through mountains of discarded ideas that we have recorded, grabbing something and building a track on top of it. It's a really rewarding way to write as it feels like remixing. Plus, by recycling audio it has to reduce our carbon footprint or something. Is that how it works? We love the feeling of finishing a song when it feels a little unrecognisable, like we didn't write it. But we did, we promise.

Luke: This is going to sound like I'm an asshole but honestly I'm inspired by anything that paints a picture – films, music, stories of any kind (dogs too!). I get super excited when something moves and surprises me, especially dogs. When I was around 13 years old I started learning guitar, listening to punk and watching Stanley Kubrick movies. From there I started to write music. Years later I listened to J-Dilla's 'Doughnuts' and around the same time, Animal Collective's 'Merriweather Post Pavilion' and got obsessed with some other film directors and composers. The cycle continues.

Mel: I'm the same as Luke (but with a touch more Beach House). For me, it's also a solitary environment of books and chips.

What can punters expect from a Holiday Party live show?

Luke: Panic! No, not really (probably). Because we write mostly at our respective homes and on computers, we have been working hard to make the live show something we can 'play'. So it's all stand-alone samplers, keys and real instruments on stage. No computers anywhere. Not because we are against them but because I have a phobia of using a computer in front of a crowd in case something goes wrong. Scott Bromiley (who co-wrote 'I'm Still Here' with us) and the incredible Pete Bernoth are helping us play these songs on stage and it's really fun. The songs sound different every time we play them and in a good way, hopefully.

Mel: The live set features three bearded angels on a sample rig, a spot of dancing and hopefully a lot of good times. BIGSOUND will be our 2nd and 3rd EVER shows, so it'll all be very new for us.

Luke: I've had the privilege of working with Robert Forster for a while now and he is full of amazing advice on any given day. It's all incredible. It's hard to choose a quote from him, but a big one that stuck with me was when he said that a vocal take is about 70% of a song which is so true. It's super easy to get caught up on what tambourine goes where and how many double-tracked guitars should go in a chorus but it all kinda means nothing if the vocal isn't working. I'm sure there are even better ones than that. I'll write back when I remember.

Mel: I can't remember who said this to me, but it was great advice. It was essentially, "don't be held hostage by what other people think, concentrate on making music that you want to hear and want to play". Also, anything that Patti Smith says, goes!

Mel: Depending on the situation: 'Sophisticated Lover' by Donne Benét (with film clip), 'Anxiety' by Eddy Current Suppression Ring, 'Miracle' by Kimbra, 'Friday on My Mind' by Easybeats.

Mel: 'The boy's story of his faithful family dog' by Grand Salvo.

Luke: 'Clouds' by The Go-Betweens.

Luke: I guess it was our first gig at the Foundry. We played with GL, Hatchie and Party Dozen. We were on first. Everyone was amazing. Oh wait, I saw No Zu a couple of nights ago. Gawd damn... that was really good too.

Mel: Ditto! Party Dozen shouting into a saxophone was a particular highlight.

Releasing more songs, playing some interstate shows and working on our first album. 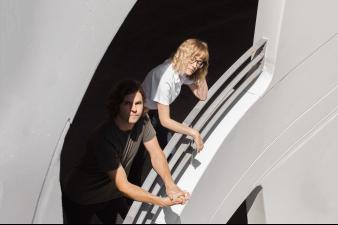 Woah this is a little impressive journey squeezed into/just under 4 mins. So much romance, drama, scorn. And what's better is you genuinely had me surprised at every bar, string just like a great J. Dilla track. Vocals are sweet and yet, The instrumental is so strong alone it could lend itself to many guest or completely different voices which speaks volumes about the production.

Woah this is a little impressive journey squeezed into/just under 4 mins. So much romance, drama, scorn. And what's better is you genuinely had me surprised at every bar, string just like a great J. Dilla track. Vocals are sweet and yet, The instrumental is so strong alone it could lend itself to many guest or completely different voices which speaks volumes about the production.

Something That's Not Wasted

What a joy this is from Holiday Party. Colour and life feel like they're bursting from every seam of this track!

What a joy this is from Holiday Party. Colour and life feel like they're bursting from every seam of this track!

A band that have always had production instincts showing that their songwriting has only gotten better with time. This is beautiful but also memorable

A band that have always had production instincts showing that their songwriting has only gotten better with time. This is beautiful but also memorable