‘Roy Orbison meets the Sex Pistols’ - or so they’ve been told - The Honey Pies combine the unassuming simplicity of post-war pop with the brasher sounds of the modern day, creating music at once nostalgic and revelatory. Pre-post-rock, if you will. In three years they’ve released three albums, each receiving airplay nationally, supported Tim Rogers, Deerhoof, The Jezabels, Leader Cheetah and Ball Park Music, played the Adelaide Big Day Out and had music featured on TV’s ‘Offspring’ and ‘Please Like Me’. Their latest album ‘Coconuts’ was mixed by Neil Thomason (My Disco, Wagons, Crayon Fields) and mastered by Fred Kavorkian (Ryan Adams, Iggy Pop, The National), and is their finest work yet. '****...there's something a little bit vintage about your sound with the harmonies and classic songwriting' Zan Rowe, Triple J 'ALBUM OF THE YEAR [...] surefire instant classics’ Spoz, spoz.blogspot.com ‘...unadulterated pop goodness [...] liable to give you diabetes’ Noah Sanders, soundonthesound.com ‘BEST POP ALBUM OF 2010 [...] Radio-friendly, rockin' and occasionally raunchy’ Luke, Play/Pause/Play 'As a modernist, I appreciate their modernity.' Tim Rogers, renowned modernist ‘...Jon Marco's output has hinted at the makings of one of Adelaide's - or even Australia's - better pop songwriters’ Walter Marsh, dB Magazine ‘...such screams of adulation are normally only reserved for international acts [...] people don’t just like The Honey Pies, they love them’ Adam, theaureview.com ‘...these guys rocked out with an energy that'd rival The Vines’ Dom Alessio, Triple J 'The melodies are sweet, verging on timeless...’ FasterLouder, fasterlouder.com.au ‘...the kind of album that would effortlessly charm your parents and deflower you on the sofa the minute they left the house’ Matt, songsbytoad.com

Charming young Adelaide 4-piece The Honey Pies are one of the winners of our Big Day Out competition. They'll be delivering their fuzzy retro-tinged pop to the Adelaide Big Day Out on Friday February 3rd.

Our music I think is basically our own little spin on British guitar-pop stuff. It's still developing all the time I think! I want to be one of those bands like Pavement where after they've put out a body of work you can really watch them mutate over time, where each album is like a chapter in a story. I always find the idea of a "sound" a bit boring... I think you can become to pre-occupied with a "sound" and forget to ask yourself if it sounds any good. Lots of sounds are great, if they're done well.

You’re the Adelaide winners of our BIG DAY OUT competition. What can BIG DAY OUT revelers expect from The Honey Pies live show?

Well, there's actually been a bit of a mix-up with the whole Kanye West thing. He's not coming to Adelaide anymore but his entire entourage and stage production is still coming - they weren't able to cancel the freight at such late notice or something - and so basically rather than let it go to waste we're hopefully going to use all of Kanye's backup dancers, pyrotechnics, costumes etc. We haven't run it past the organisers yet but I'm sure it will be cool with them.

What are you most looking forward to about the Adelaide BIG DAY OUT on Feb 3rd? Who are you psyched to see?

I really want to see Best Coast and if I were on the east coast (which is apparently the best coast) I'd be front-centre for Kanye West, cause I'm a closet Yeezy-guy. I haven't been to the last two Big Day Outs actually so it'll be nice to rekindle that fire. Nice sunny day. Drinks. Friends. Great music. It's always a lot of fun.

My uncle is a film director and he gets young directors coming up to him and saying "How do I get into film?" and he gets annoyed because he feels that with today's technology film is a lot more accessible than when he was starting out. So while he would scrimp and save to buy a graveyard shift in a professional editing suite, today people can buy off-the-shelf software and do it all themselves at home - And yet, they don't. There's no excuse anymore to sit around waiting for someone to hand it to you. I apply the same advice to music, I just feel like we're musicians and we should just shut up and make music, even if we have to do it all ourselves. We live in a time that allows us to do that, so let's do it.

We're playing once a month or so in Adelaide. Playing with Deerhoof next week, hopefully some other cool supports later in the year. We're recording our third record later in the year. We'd like to make it interstate once or twice in the year and we even have friends in Japan and Texas who are trying to get us to come over and if we were to come into a little money I think we'd really love to do that. The true answer is that I don't really know. If you'd asked me in November what we were doing in 2012 I wouldn't have known we were playing the Big Day Out. Who knows. 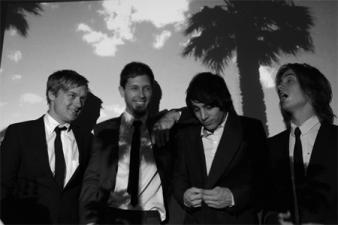 Congratulations to our 2012 Big Day Out winners!

Congrats to Dune Rats, Underlights, The Growl, King Gizzard and the Lizard Wizard, and The Honey Pies!
More

Much more fun that reading 'Thus Spoke Zarathustra' - this is a cracker.

Much more fun that reading 'Thus Spoke Zarathustra' - this is a cracker.