Hailing from Melbourne, Lachie Gilmour and Bella Venutti combine their interests in alternative rock and progressive pop to create a style that is refreshingly their own.

Read Interview
Tell us about your music. How did you develop your sound?
We're huge fans of garage rock, but initially, we weren't able to achieve the heavier sound we were after with only two members so we begun as a bit of an indie pop outfit. When we added a drummer and bass player to the mix we started toying with combining the grittier instrumentals with strong, clean vocals and we've arrived at where we are now!
What’s your greatest source of inspiration for making music?
A huge part of it is definitely channeling the energy and fun we have together in the jam room into playing live and recording music for other people to hear. Sharing what you're most passionate about creating with other people and recieving a positive response is insanely rewarding.
What can punters expect from an IV League live show?
You can expect that Bella might very well introduce the band under a false name such as "My Chemical Romance" or "Alien Antfarm". Otherwise, a whole lot of sweaty energy and plenty of dancing.
What’s the best advice you’ve been given and who was it from?
Bella: My Mum always says that "the extra mile is never crowded" and that's always stuck with me in every thing I do. It sort of prohibits any hesitation you have in jumping head first into things that you want to achieve.
What Australian track would you play to cheer up someone who was crying?
How to Make Gravy - Paul Kelly
What Australian track would you play to someone to make them cry?
Outsider - Violent Soho
You’re the DJ at a party. The dance floor is pumping. What Australian track do you put on next?
Space Cadet - The Murlocs
What was the last local gig you went to? How was it?
We went to see our friends Tiny Giants play an in store gig at Off The Hip Records in Melbourne. Always fun watching those guys, they killed it!
Tell us about the bands or people in the Melbourne music community that inspire you.
We're super inspired by our friends in the Melbourne scene, especially Hills Hoist and Gonzo (some of the coolest dudes out!!), and our younger friends up in the Geelong area Tiny Giants and The Dare Ohhs who are some of the most impressive high school bands you'll see play live.
What are your plans for the rest of 2015 and into 2016?
Lots of writing and preparation to record an EP early next year, playing as much as we can and hopefully pulling together an east coast tour.
View Profile Hide Interview 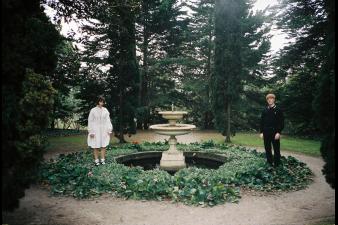 iv league brimming with attitude here. feed me this poison.

iv league brimming with attitude here. feed me this poison.

I love how rough and tumble Bella sounds on this track. And the guitars are next level good.

I love how rough and tumble Bella sounds on this track. And the guitars are next level good.