Jess and Rob formed The Bone Collectors in the Northern Territory.

Jess Ribeiro and the Bone Collectors have slowly evolved out of many warm tropical nights jamming on balconies and courtyards in Darwin, NT. Equipped with a swag of songs Jessie Jane Ribeiro sings enchantingly into the night with her delicate strumming style, shepherded by the Bone Collectors Rob the Law and Damo Meoli on drums.

My music is simple .I am a singer of stories. Stories gathered from people, stories from the past, stories of the present, of battles and struggle, love, death, whatever. I tend to create a landscape which depicts a certain mood and feeling, and Rob fills in the picture with his unique musical powers and sense for details, whilst Damo brings muscle and energy to the songs through his drumming. We are, honest, sincere and revealing,yet industrious and full of strength and above all we love playing music with each other and sweating it out in the humid tropics of Darwin .

The studio or the stage - where's your comfort zone?

Our comfiest zone is on a balcony hanging out eating food at someone's house, but when it comes to performing in a studio or on a stage, we prefer the stage because it doesn't offer second chances, it's unpredictable and you have to roll with whatever is going on in that moment of time. However, our drummer likes the studio- which requires patience and concentration. There are advantages to both and we are becoming more at ease with the studio and the stage.

What's the biggest challenge facing your band at this point in time?

Currently the biggest obstacle we are facing as a band is all being in the same place at the same time, as Rob has moved down to Melbourne for a while, and Damo is considering working as a park ranger in the NT, so it's a bloody logistical nightmare, but the passion and commitment is strong enough that something will sort out!!!

Tell us one of your earliest live music memories.

One of my first live music memories was when Frenzal Rhomb came to my small home town, in Armidale, NSW. The venue was at the Cathedral hall which was a small building owned by the Catholic community. I was about 14 or 15 and somehow ended up sitting out the back with the band in their white combie van drinking orange and vodka imagining that one day I would be touring around the country for a living. I asked Jay for a cigarette- he gave me his last one, it was a peter Stuyvesant still in the packet which I kept and pressed into a photo album. I was star struck. After the show some older kids I knew where going back to the hotel Frenzal was staying at but my neighbour's dad showed up to tell me he had been sent by my mother to tell me it was time to go home. The next day it was reported that the hotel had been trashed by the band and the TV taken outside and dragged across the car park- I was so envious that my friend had been there and had a drunken rock n roll moment with Frenzal Rhomb... but at least I had Jays cigarette packet pressed into a photo album and one day it would be worth millions....

What's your sure fire cure for writer's block?

1. Catch public transport. It stinks, its cheap, it's good for dreamtime, and it's dangerous. 2. Watch and listen to others- they have good stories for you to sing about. 3. Read the words of other poets / musicians that you like. 4. Stop watching so much TV, playing video games and computer, it wrecks our imagination and we need to protect it so we can create. 5. Walk and stay in motion especially if you are prone to depression- you need to keep moving so you don't devolve and become a vegetable. 6. Lay off the dope 7. write junk everyday- and good stuff comes 8. Eat fresh Biodynamic or organic food- this food is the only food that will help you to stay a free thinker.

Does your band have a support person or mentor outside the band that you can't imagine doing without?

Megan Spencer from Darwin ABC radio has been a great support for us. She is the only radio person that we know of in Darwin who actively goes out and listens to the emerging and established live original acts around town. She is genuinely interested in assisting artists like us who would like to pursue music as a career path. I also spend a lot of meaningful time with Holty (infamous Darwin painter and old school musician) and Mr Budack (prolific hardcore German drummer/wine connoisseur) from the Darwin Cultural Centre. I always need a pen, a paper, and the next day off when I am learning from them. What kind of characteristics does a band need to have in order to break through in the Aust. Music scene? Which of these qualities do you have, and what do you think you need to work on? Image, attitude, sex appeal, and a good lawyer, are needed in order to make it in the Australian music scene... But seriously, we reckon Passion,enthusiasm,commitment, initiative, patience,comradeship and a hard exterior are some of the characteristics that are important in being successful in the Aus music scene. It's really important that a band always remember that it is about the music and not the image, so keeping the passion alive is important. Patience is needed as your music is not going to sound great overnight, most songs take time to get right and bands take time to get the dynamics right, and getting your music out there takes time too.

Tell us about the local music scene your band is part of.

We are a part of a great local music scene in Darwin; everyone is really supportive and encouraging. It's quite a down to earth music scene here and not so much about image. There is a little venue for musicians called the Happy Yess, which we are indebted to in giving us the chance to hone our act and always to an attentive crowd. There is a lot of diverse musical talent in the NT that will hopefully emerge on a national scale over the coming years. 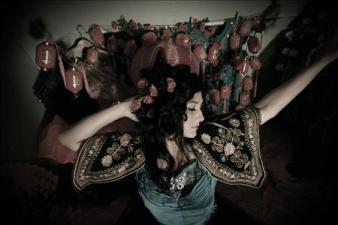 Jess is a great singer. I really love the way she delivers a song. She never over does it. There's a lot of personality there - like the subtle force Cat Power often has. She's got some other fine material too.

Jess is a great singer. I really love the way she delivers a song. She never over does it. There's a lot of personality there - like the subtle force Cat Power often has. She's got some other fine material too.