Waiting for Time to be released 16 February 2021

Space echoes ricochet across deadpan vocals, yearning for impossible touch that's separated by oceans and timezones. Waiting For Time is a romantic introduction to Julia Why?'s new collection of stargaze songs, written across London, Paris and Athens at the dawn of COVID19.

Out 16 February 2021, Waiting For Time is her first release since 2019's album 'Hysteria' and is one of many results from an artist residency and 8 months abroad. With life plans cut short by COVID-19, Julia finished this series of tracks in Sydney working closely with a producer for the first time - Ben Moore of Harvest Recordings (whose work can be heard on the records of Moaning Lisa, Le Pie, Leonardo's Bride, among others.)

JuliaWhy? has toured extensively throughout Australia and Canada, won triple j Unearthed and played alongside some of her favourites including Tropical Fuck Storm, Waxahatchee, Hinds, Hatchie, Jade Imagine and Major Leagues.

The enduring quality of JuliaWhy? is unpretentious, clever and honest songwriting that is both beautiful and brutal. Wylie manages to write songs worth crying over and dancing to, while maintaining a political, anti-patriarchal message throughout. Julia draws inspiration from the stars, space and time; the mind and it’s ability to lift us up and take us down; the world - it’s pain and beauty.

The Guardian: “For fans of the Cocteau Twins, My Bloody Valentine, Slowdive. Halfway through this MBV-indebted slice of cloud-skipping shoegaze, a surprising one-liner comes out of nowhere and slaps the listener across the face."

FBi Radio: "With alt rock cred, attention grabbing melodies and real pathos, Julia Why? have made a habit out of inspiring awe–both live and on record–and it’s earned them some serious airtime on FBi Radio."

2SER: “JuliaWhy? is the axe slinging femme fatale that we were all in dire need of.”

“What it comes down to is infectious and fantastic songs. They’re short knockouts that scrape away bullshit, and replace it with the kind of delirious, fuzzy pop that put Karen O and Sleater-Kinney on the map” - Ryan Saar, Fbi Radio/Soundly Sounds

Sydney garage pop three piece JuliaWhy? make songs that are like a prickle behind your neck and end up like a punch to the face. They were one of our 2014 NIDA winners, which saw them have this video clip filmed for them by post-grad NIDA students and premiered on rage.

I've been playing music and writing songs since I was 10. So the sound we have now has been a long time in the making and has gone through a lot of stages. I've spent a long time listening to all different kinds of music. But the songs I've recently written have definitely been influenced by all the local music that's been happening all around me - living in a sharehouse with seven other people that also make music. The music we write as a band now is pretty collaborative. We usually drink a few beers, get a bit tipsy, go to the studio (Peter the drummer built a recording/rehearsal studio called Audile Design in Marrickville) and jam and things tend to happen organically from there.

A long neck of Coopers Red. Jokes! Nah I'm not sure I've always just had to make music - it's a lot of fun, it's therapeutic, it stops me going insane and that's a pretty big source of inspiration in itself. I get very angry about stupid things like politics and the state of the world and if I didn't have music to deal with it I would probably be dead by now.

You’re one of the winners of our NIDA competition and had the opportunity to work with a NIDA directing student to create a film clip for your track ‘Just One Night’. Could you talk us through that process?

It was really fun and we were lucky because we live in Sydney we got to kind of become friends with the director and the designer of the clip. They came to a few of our live shows to see what kind of personality we have I guess. We drank a few beers together and chatted about stuff. They asked us to send them music videos we absolutely hated. Which was good. They asked us "What is a definite no go zone" and I said "No lame party scenes with red cups." Then they went away and came up with a concept which they pitched to me the day before I left for Sri Lanka for 5 weeks. While I was away we emailed each other and then we filmed the day I got back. Filming that day was a lot of fun. I was buzzing from jetlag/excitement at seeing all these people working together to create something.

What can punters at a JuliaWhy? live show?

'Stay at Home Dads' by Beef Jerk followed by 'Sun Up' by Day Ravies.

'Cotton' by Beef Jerk (unreleased yet) and definitely 'BalladHEAD' by Mope City.

'Lick the Pip' by Housewives.

My friend put on a festival at the Marrickville Bowling Club called 'Building Bridges for Refugees.' Dick Diver and Holy Balm headlined, Roamin' Catholics played, as did Day Ravies, DAG from Brisbane, Destiny 3000... so many bloody great bands it was bloody fantastic. In fact here's the link. It sold out and they made about $8000 to donate to Bridge for the Asylum Seeker Foundation so it was amazing!!!

We don't live in Newcastle haha but there are some great bands from there - Bacon Cakes is my personal favourite. The Sufferjets too. But my local scene is based mainly around Marrickville in Sydney. It's ridiculous how many good bands are coming out of there. In fact my friend and I are starting a record label EXXE RECORDS and putting out a mixtape that has a song from each of the 13 bands from Sydney, Melbourne and Brisbane that started at the share house we lived in together, or played shows there, or slept on our couch while they were on tour etc etc. So yeah it's pretty amazing to be kind of part of it and I feel it needs to be documented some way - hence the mixtape.

In terms of JuliaWhy? we're going to try make ourselves a video to release another single and then put out the album digitally and on cassette by the end of the year. Then we'll tour and then it's world domination... obviously. 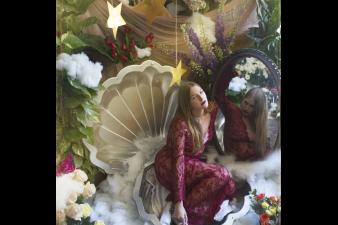 This band always gets it right when delving into the past for inspiration. The latest from Julia Why? is all about that enveloping slow burn reminiscent of Slowdive and other late 80s/early 90s shoegaze acts.

This band always gets it right when delving into the past for inspiration. The latest from Julia Why? is all about that enveloping slow burn reminiscent of Slowdive and other late 80s/early 90s shoegaze acts.

I'm a favour of vocal layers at the best of times but the lyrical contrast and the sharpness of the backing vocals really adds some punch. Soaring dream pop done well.

I'm a favour of vocal layers at the best of times but the lyrical contrast and the sharpness of the backing vocals really adds some punch. Soaring dream pop done well.

all my next door neighbours are going to hear is me blaring this rising, beautiful beast on repeat.

all my next door neighbours are going to hear is me blaring this rising, beautiful beast on repeat.